This article was originally featured in the May/June 2018 issue of Zymurgy magazine. Join the American Homebrewers Association and enjoy a subscription to Zymurgy and access the digital archive.

On a cloudy morning in Southeast Portland, Ore., John DeBenedetti walks to work, as he has for decades, to open the United States’ oldest brewing supply store, FH Steinbart Co. John stops to pick up an apple, freshly fallen from a neighborhood tree, to enjoy for breakfast.

As the owner of FH Steinbart, John reflects on the company’s celebration of its 100th continuous year in operation. As it has since 1918, FH Steinbart remains an independent purveyor of ingredients, equipment, and knowledge to beverage creators and providers. Its comprehensive mix of inventory and expertise taps into an amazing Oregon legacy of brewing and winemaking knowledge. As part of this creative community for 100 years, FH Steinbart has grown up with, and has helped nurture the vibrant Pacific Northwest craft-brewing scene.

The company’s founder and namesake, Franz Steinbart, lived many places and worked at several jobs before moving his family to Portland in 1915. Born in 1854 in West Prussia, Franz immigrated to New York at age 25. From there, he moved to Iowa, where he worked on a farm and learned English. He spent several years in various types of employment, and in 1889, he married his wife Henrietta in Cleveland, where they started their family.

After relocating to Milwaukee to manage the affluent Deutsche Club there, Franz went to work for the Koss Company, a manufacturer of brewing equipment, and traveled throughout the western part of the United States selling equipment and dealing with brewers. In 1912, he moved the family once more, this time to manage a hotel in Barons, Alberta, Canada. Three years later, the Steinbart family relocated to Portland, where Franz founded FH Steinbart Co. in 1918.

Prohibition began in the United States shortly after the store opened. To survive, FH Steinbart sold equipment and ingredients to large commercial breweries that continued to produce “near beer” and soda pop. The company also sold to wineries that supplied sacramental wines for use in various religious ceremonies.

Franz Steinbart hired Joseph DeBenedetti, father of current owner John DeBenedetti, in 1926. Joseph repaired and installed brewing equipment for the company. In 1934, when Franz Steinbart died, Joseph and another employee—Joseph’s cousin Angelo Curletto—bought the business from the Steinbart family. Joseph bought the company outright when his partner Angelo died in 1957.

Current owner John DeBenedetti went to work for his dad in 1975. In 2005, John sold the Steinbart wholesale business to the company that is today known as Brewcraft, headquartered in Vancouver, Wash. FH Steinbart Co. continues to thrive at its retail location in deep Southeast Portland, which becomes more trendy by the day as more as more people flock to the city for its laid-back lifestyle and rich cultural amenities.

Steep crushed grains in steeping bag for 30 minutes in 150° F (66° C) reverse osmosis (RO) water. Remove grains and discard. Add malt extracts and lactose and stir to dissolve. Top up with RO water to desired boil volume. Add hops at stated intervals and conduct a 10–20 minute hop stand immediate after knockout. After boil and hop stand, chill to 65° F (18° C), aerate, and pitch yeast. After fermentation begins to slow, add fruit and vanilla bean. When fermentation is complete, rack onto dry hops and hold no more than 7 days at 70° F (21° C). Bottle with priming sugar or keg and force carbonate.

In 1978, President Jimmy Carter signed HR 1337 into law, which legalized home­brewing at the federal level. Prior to that, homebrewing was technically not permitted unless one paid excise taxes, a holdover from the Prohibition days of the 1920s and 1930s. A couple of years later, in 1980, Cartwright Brewing Company opened in Portland, marking the beginning of the local craft beer industry.

Soon after Cartwright opened its doors, the founders of Portland’s modern craft beer movement set up shop around town. Rob and Kurt Widmer opened what was then a small brewery, as did Art Larrance and Fred Bowman (Portland Brewing), Mike and Brian McMenamin (McMenamins), and Dick Ponzi and Karl Ockert (BridgePort Brewing). These early brewers were able to get Oregon laws changed, which allowed microbreweries to brew and sell at the same location.

Portland at that time was starting to grow again after losing many timber jobs. Most of the new residents were young, adventurous, and enthusiastic about local products. Early artisan brewers honed their craft with every batch they brewed. They would read about a beer style in a book and then try to recreate it. There weren’t many recipes, so they made them up as they went. Some were hits; some were not. This small community of brewers shared information with each other, and FH Steinbart played a large role. If a brewer had an equipment failure, it wasn’t uncommon for someone from another brewery to come by and help out. This still happens today in Portland. 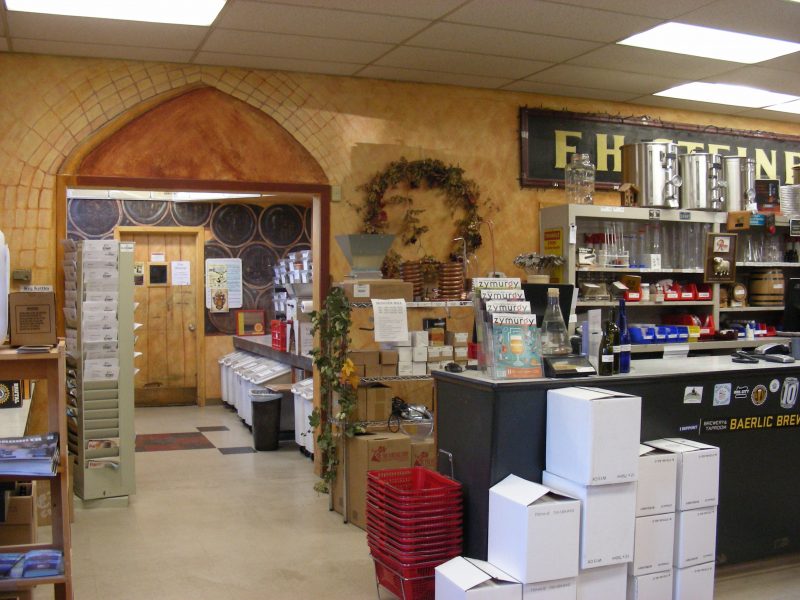 The draught department at FH Steinbart has installed beer-dispensing systems at some of the largest sports and entertain­ment facilities in the Pacific Northwest. For example, at Autzen Stadium on the University of Oregon campus in Eugene, Steinbart installed a Perlick Century Beer System. It is a 395-foot (120-meter), 24-product, glycol-cooled copper system on what is called the Club Floor of the stadium. With that much line from keg to faucet, about 2.5 half-barrel kegs of beer are en route to four product towers at each location at any given time when operating at full capacity.

FH Steinbart has also installed draught sys­tems at some of the Portland area’s most iconic breweries, including installations at three Deschutes locations, all three Hopworks Urban Brewing locations, Cascade Brewing, Block 15, Wayfinder, and the Full Sail and Double Mountain breweries in Hood River. In the early days, Steinbart worked with Henry Weinhard/Blitz, Lucky Lager, Olympia, and Rainier Breweries. The company has also installed systems at many other outstanding breweries. Being in business for a century means FHS has had the good fortune to cross paths with quite a few great brewing industry people.

In 2009, FH Steinbart draught guru and department manager Mike Moscarelli was asked by Christian Ettinger, owner of Hopworks, to join his team of Jamie Nichols and Phillip Ross of Metrofiets and other skilled craftsman to build a ride­able beer bike. FH Steinbart has plumbed several other rolling beer systems over the years, including Deschutes’ giant keg on wheels Woody, Anheuser-Busch’s Marathon motor coach, and one of the Rogue Brewery Tour buses.

In 1980, FHS owner John DeBenedetti helped establish the Oregon Brew Crew, which remains Oregon’s largest active homebrew club to this day (see Last Drop on page 96 for more on the Oregon Brew Crew). As it has since its founding, the Brew Crew meets monthly at no charge in the FH Steinbart warehouse. Local home­brewers know FH Steinbart as a drop-off entry location for homebrew competitions in the area, and for years, Steinbart has donated equipment and ingredients to be given away as prizes at local homebrew and winemaking events.

The do-it-yourself ethos has always been a big part of homebrewing, and it’s an especially strong part of Portland’s culture overall. Steinbart staffers say the interac­tion they have with customers is the most enjoyable part of what they do. When customers read an article about a new ingredient or piece of equipment in maga­zines such as Zymurgy, customer buzz lets staffers know if it is something they should consider carrying in the store. For example, 1-gallon beer kits, first popular among new brewers with limited space, are increasingly sought by experienced brewers who use them for test batches.

Portland’s homebrew scene is unique for many reasons, but a few standout aspects make being part of this community espe­cially enjoyable.

To celebrate its 100th anniversary, FH Steinbart has a variety of promotions scheduled throughout the year, includ­ing in-store and online giveaways and introduction of a new line of new home­brew beer kits that Steinbart staffers are developing in partnership with breweries in the region.

All of us in the Portland area are thrilled to host AHA Homebrew Con this June. For Steinbart, it’s especially timely that the conference takes place during the store’s 100th anniversary. Staffers are talk­ing to the AHA about hosting a hands-on clinic on how to brew with locally sourced ingredients, and everyone looks forward to visiting with AHA attendees in the store and at the conference.

Homebrew Con’s return to Portland in 2018 is both an opportunity and a respon­sibility. It’s a great chance to make connec­tions with the most devout and the most innovative homebrewers in the world of craft beer. Shops like FHS learn so much from these connections about where the community is headed in the future.

But, our Portland homebrew community also has a responsibility to go above and beyond doing our part to host the world of brewing in our little corner of the craft beer world. And this little corner is unde­niably a mecca of sorts in that world, and we all want to represent it well. 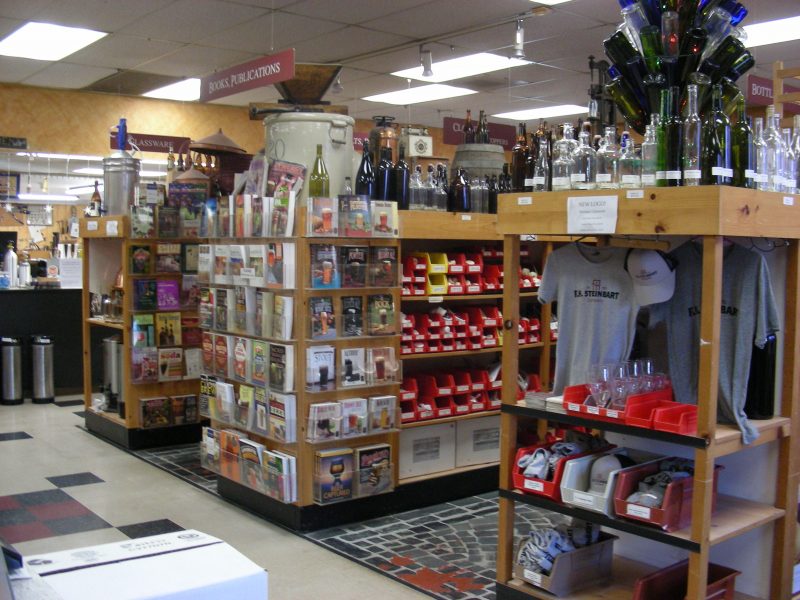 Steinbart has built relationships with countless great customers over the years, many of whom have gone on to become successful commercial brewers. And FHS is honored to have welcomed brewing royalty to the store, including Charlie Papazian, Michael Jackson, and local guru Fred Eckhart, who taught everyone to “listen to their beer.”

During its first century in business, FH Steinbart has had to continually evolve to meet the needs of homebrewers. As shopping habits change, Steinbart staff will continue to offer their homebrew­ing knowledge and advice in new and interesting ways.

Ray Berardinelli has been a Steinbart customer since 1995, when he and his friends started homebrewing as Bad Dads Brewing. Ray also makes ciders and meads and enjoys experiment­ing with his recipe for Rocket Fuel fig wine, which he makes from the fruit of the gnarly Desert King fig tree in his backyard.

6 Homebrew Con Recordings That Will Make You a Malt Master