Find out how your homebrew club can be the next Radegast Club of the Year.

Heart of the Valley Homebrewers (HOTV) serves homebrewers from Oregon’s central Willamette Valley, drawing its members from Corvallis, nearby Albany, and the surrounding areas. The club’s main focuses are on beer and brewing education; hosting one of Oregon’s oldest homebrew competitions; providing community service; and charitable giving. The last of these is driven by the club’s fall beer festival, Septembeerfest.

Our membership varies because we are based in a college town, but HOTV has about 30 to 35 active members at any one time. While there is little ethnic diversity in the Willamette Valley of Oregon, the club strives for inclusivity through gender diversity and occupational diversity—all interested members of our community are welcome to join the club.

Women take an active part in running the club, and in recent years, women have served as president, competition chair, and secretary. Corvallis, which is home to Oregon State University (OSU) and its strong Fermentation Sciences program, contributes members, resources, and inspiration to the club. Our membership reflects the community: students (including some studying fermentation sciences), staff and faculty; homebrew storeowners; commercial brewers; professional workers and tradesmen; all contribute ideas and to the club’s success.

HOTV has a long and glorious history. It was founded as Corvallis Homebrewers in 1982, with the inaugural meeting held on June 6 of that year. As homebrewers from surrounding communities became interested in participating, the name was later changed to the more inclusive Heart of the Valley Homebrewers. The club has a history of recruiting members for the AHA. For example, one of our members, (the late Lee Smith) was profiled in Zymurgy (March/April 1999), where he was recognized as the AHA Recruiter of the Year.

HOTV meets monthly, usually at the home of a member, where members sample one another’s beers, as well as those of local brewpubs and unusual commercial brews. We occasionally arrange comparative tastings of commercial examples of different beer styles, with members voting according to their preferences. This is a great way to experience brews that one hasn’t tried before and to find new favorites and new brewing challenges. Occasionally, meetings are held at our local brewing supply shop, Corvallis Brewing Supply, or at local craft breweries.

“Women take an active part in running the club, and in recent years, women have served as president, competition chair, and secretary.”

HOTV is formally organized and governed by its bylaws. A board of directors meets regularly to discuss club business, and we publish minutes of both club meetings and board meetings.

The club produces a newsletter that is distributed to members electronically. We also maintain a website at hotv.org. The club is also on Facebook, which has become one of our primary means of communication. We maintain a special page for our Septembeerfest event. The newsletter keeps members informed of club educational matters, club activities, deliberations, and decisions of the board of directors.

HOTV is strongly committed to the education of our members and to the general public in the art of brewing in general and homebrewing in particular. To that end, we promote the following activities.

This is a day tour of Oregon breweries and brewpubs held in the spring and the fall. In the spirit of responsible drinking, the club hires a bus and driver to avoid the temptation to drink and drive. The educational purpose of the event is to provide insight into how breweries, especially small breweries, operate and to give members behind-the-scenes access not usually available to the public.

For example, in November 2015, the club’s Fall Brewery Educational tour traveled east to Bend, home to more than 30 breweries. The highlight of the trip was visiting a small brewery, the Ale Apothecary, which focuses on barrel-aged sour beers; this brewery is known for lautering out of a tree trunk, over a bed of pine brush. This incredibly rewarding brewery visit really expanded members’ views of what is possible with brewing. In late October 2016, we visited Hood River, Oregon, and enjoyed a personalized tour of Logsdon Farmhouse Ales. 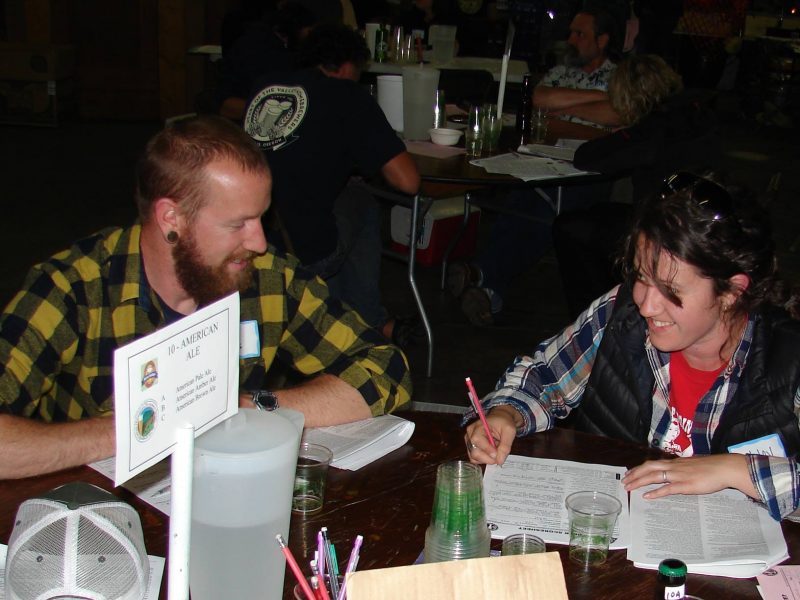 The club provides beer judge training, with the aim of taking judging exams. These activities are held according to need, whenever there are sufficient numbers of prospective participants. They are important in exposing prospective judges to many different beer styles, with an appreciation of their desired characteristics. HOTV currently has 16 members who are BJCP certified. That amounts to almost 50 percent of our membership. This year, we are proud to say that two more of our members passed both the online and tasting exams.

Program: These are highly educational sessions in which members participate in brewing on the equipment and facilities at OSU. The purpose of this event is to teach members the fundamental biochemical and biological principles underlying mashing, fermentation, and other aspects of brewing. We learn a lot and have a heck of a fun time doing it!

Sensory Training: As part of our educational mission, the club periodically organizes sensory tastings to help participants recognize off flavors. These sessions, open to the public, are also held at OSU and are taught by faculty members in the Fermentation Sciences program.

These events are held periodically in the “brewhouses” of club members or, occasionally, at microbreweries. Their purpose is help homebrewers learn from one another and to educate members and newcomers about different brewing techniques, different equipment setups, etc. Attendees are encouraged to bring friends who are interested in becoming brewers.

Members of the club participate in other educational events such as the AHA Big Brew day. These events are held in locations where members of the public are likely to stop by, ask questions, and, hopefully, join the hobby. We take any opportunity that we can to educate the public. In 2015, out of the many brew clubs in Oregon, HOTV was asked to put on a demonstration of homebrewing at the Oregon State Fair. This year we plan to hold a Big Brew day in downtown Corvallis, in a parking lot next door to our local homebrew store (LHBS), Corvallis Brewing Supply. This should attract a lot of attention. 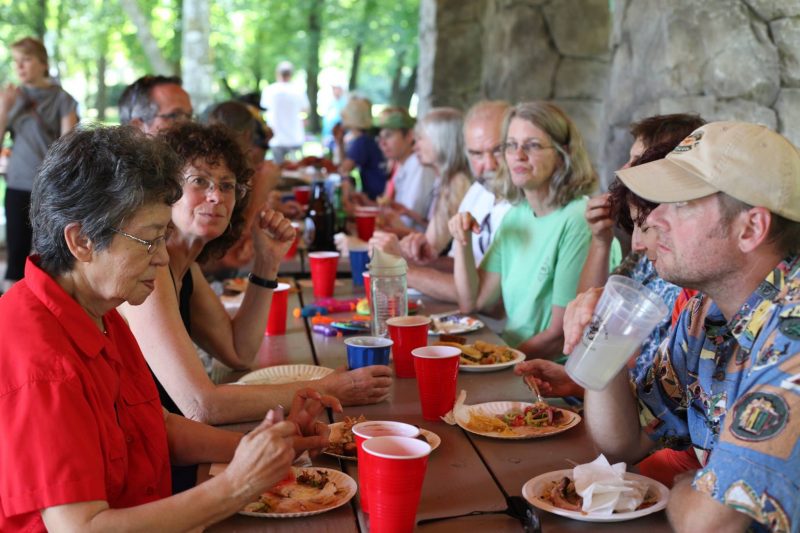 Competitions add variety for club members and allow the club to give back to the homebrewing community. One of the longest continuously running homebrew competitions in the nation, HOTV is hosting its 35th annual Oregon Homebrew Festival. This competition is held in Corvallis or Albany on the third weekend in May each year. It is an AHA and MCAB (http://mcabchampionship.com) recognized event.

“One of the longest continuously running homebrew competitions in the nation, HOTV is hosting its 35th Oregon Homebrew Festival.”

Homebrewers from all over the country enter the competition, from our own members to the public. BJCP judges from the club and surrounding area evaluate the entries, and we involve both novice judges and newcomers. The Friday before the event, we hold new judge training for all new judges wishing to participate, which is designed to promote beer literacy and education. Prizes and ribbons are awarded to the winners.

This event serves two major educational purposes. First, it allows judges to develop their tasting and evaluation skills, often leading to their participation in the BJCP. The second purpose of the event is to provide brewers with critical evaluations of their beers. Entrants are provided with a written evaluation of their entries using standard BJCP forms, helping to educate them as to ways they can improve their brews.

This year HOTV began a new program of financial support for members to attend the Pacific Northwest Homebrew Conference, an educational program that includes a series of lectures by experts, as well as tastings of commercial beer and homebrew.

One of our members owns Corvallis Brewing Supply, our LHBS. He holds regular classes introducing people to homebrewing, which benefits both his business and the hobby at large.

Finally, as pointed out elsewhere, we provide a booth at Septembeerfest at which we serve beers brewed by our members. Our goal is to convince members of the public attending the festival that homebrewers can make beers rivalling the best commercial brews. 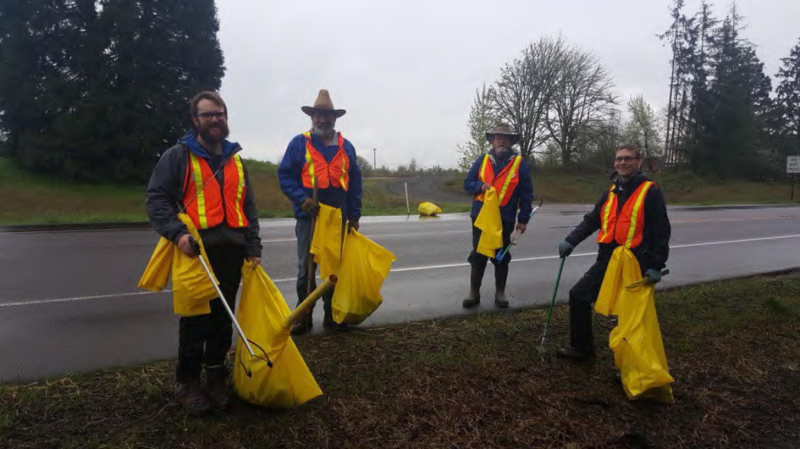 Charitable giving is a significant aspect of the club’s activities. Despite HOTV’s relatively small club size, it makes a huge impact benefiting local community charities. Because all of our profits are donated to charitable causes, the IRS has granted HOTV tax-exempt status under Section 501(c)(4). Members participate in several activities to educate homebrewers and benefit the local community.

Last year marked a fantastic Septembeerfest with more than 3,200 participants attending. We boasted an awesome beer, cider, and mead selection (72 varieties on more than 50 taps), great music, and food. This is the club’s annual signature event, and in recent years, we have raised $25–30,000 in annual donations for charities that include the Linn-Benton Food Share, the Heart of the Valley Homebrewers’ Endowment at Oregon State University supporting scholarships in Fermentation Science, the Glen Hay Falconer Foundation, and other local charities.

Held annually, the Heart of Valley Homebrewers’ Septembeerfest will mark its 10th anniversary in September 2017. This fall festival has grown steadily since its inception and become an expected tradition of the Corvallis beer scene as we endeavor to highlight the best and most interesting beers, ciders, and meads produced. This year, we expect even greater attendance, and it serves as the showcase event and kickoff of Corvallis Beer Week.

Septembeerfest is not just about serving commercially produced beverages. True to our educational mission, HOTV hosts a popular tent in which we serve free tastings of members’ brews in order to educate attendees about our passion, to show that homebrewers can produce excellent beer, and to try to get them involved in the hobby.

With the success of Septembeerfest and the Oregon Homebrew Festival, HOTV is able to support a number of worthy local charities and organizations including Linn Benton Food Share, Heart of the Valley Homebrewers Endowment at Oregon State University supporting scholarships in Fermentation Science, and the Glen Hay Falconer Foundation. Since 2006, more than $140,000 has been donated to local charities, the equivalent of almost $1,000 per member in recent years.

Donations to these groups have been as follows:

Heart of the Valley Homebrewers Endowment at Oregon State University 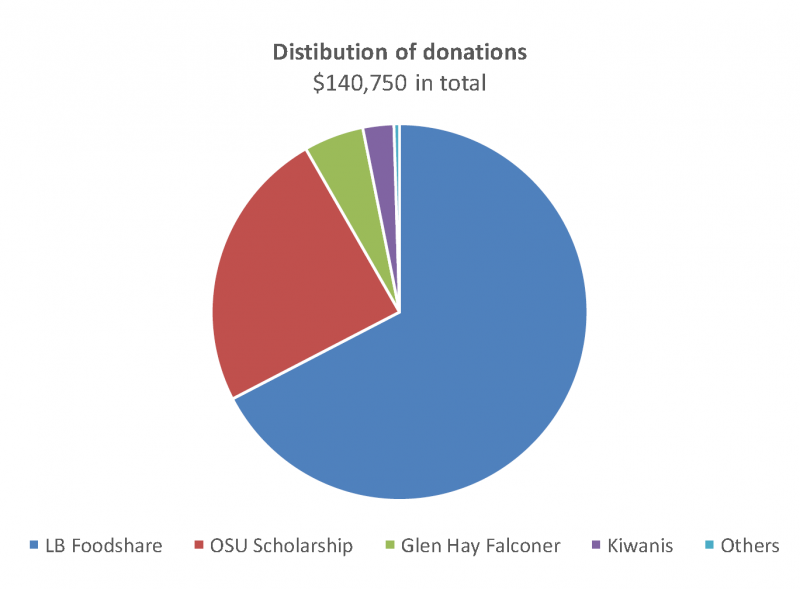 Not all volunteer activities of HOTV are geared towards monetary donations. The club also donates its time to keeping the area’s highways litter-free. The club has adopted a two-mile section of Oregon Highway 20 between Corvallis and Albany, the two communities from which most of our members come. Club members organize and perform litter pickups four times a year on this section of road. Although not strictly speaking a charitable activity, this is a significant public service aimed at helping to keep this beautiful part of the country—well—beautiful. At last count over 2,370 bags of trash have been picked up since 1995.

HOTV is a brewclub that celebrates the wonder of beer and the challenge of making the best beer possible. More than that, we are involved in numerous activities designed to attract people to the hobby and we are committed to being good neighbors, supporting our community, our local brewers and, especially, our local educational programs. We believe that this club is more than a brew club; despite its small size, how awesome is it that it can accomplish so much and donate so much to local charities and the local community?

“We believe that this club is more than a brew club; despite its small size, how awesome is it that it can accomplish so much?”