While many festival-goers scramble about and queue up to taste rarities from their favorite breweries, visitors to the Pro-Am Booth take a lap around an island of 40 different award-winning beers developed by homebrewers, all of whom must be AHA members. The selections change each day of the festival, rotating through the 118 classic and boundary-pushing beer styles of the competition.

If you want a shot at GABF hardware and having your very own beer poured at the festival hall for—ahem—60,000 attendees, make sure you join the AHA, start working on your recipe, and find a competition to enter.

Only three of the 118 homebrewers are dubbed GABF medal winners, and in 2017 all three happened to live in Colorado. In the midst of their fame and glory, we got to ask them about their GABF Pro-Am Competition experiences. Keep an eye out for the medal-winning recipes in the January/February 2018 issue of Zymurgy magazine. 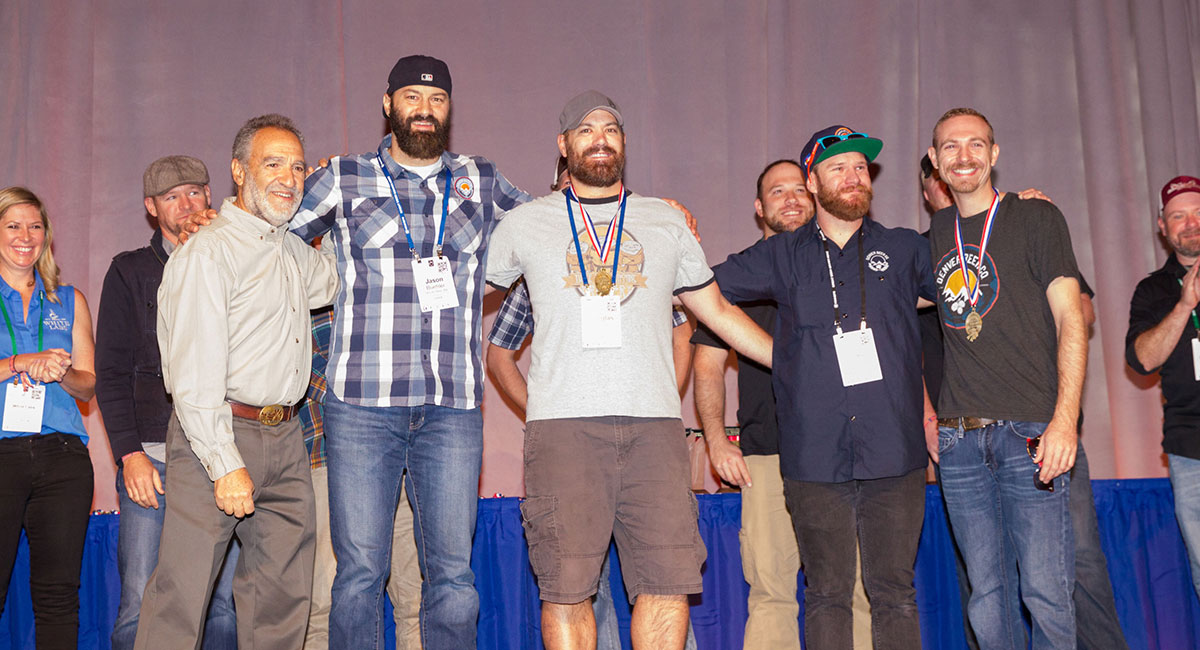 Scaling up a Homebrew Recipe

Daniel Tomkins: I had some great advice from a pro brewer friend, which was to be very particular on any ingredients that are essential to the character of the beer. This is entirely the approach I took, mostly deferring to the brewers at Black Bottle Brewery because they know their system and how recipes will translate on it much better than I possibly could.

Mark Boelman: Odell did a spot-on job with the recipe and ingredients. However, there were some differences to note. The original recipe had a mash cap, compared to Odell’s recipe which mashed everything. The homebrew recipe was no-boil. I heated the wort to 185° F (85° C) and held it there for 15 minutes with a very low hop dosage. Odell did a full-boil schedule and a 60-minute hop addition, as they’re familiar with how their sour bacteria would perform. Odell also fermented the beer with clean brewer’s yeast before moving it over to Friek barrels to age and sour with the culture already living in the wood. The homebrew recipe had Lactobacillus and a large pitch of Brettanomyces.

Doug Thiel: The scale-up process was pretty easy. I kept all the ingredients in percentage so I could pass the recipe along to other homebrewers. Having everything in that format allowed for easy manipulation and efficiency testing of the recipe. So in effect, Denver Beer Co. was able to just plug in the numbers and go with it. 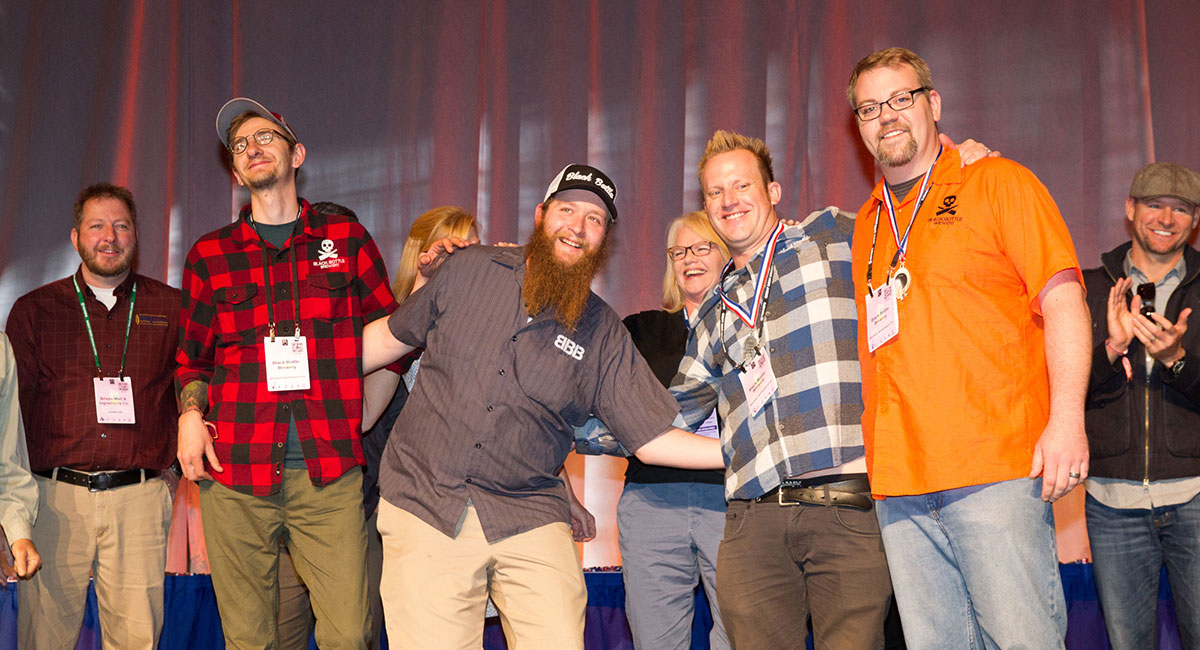 Origins of a Beer Name

Tomkins: The beer was the historical style Lichtenhainer, which struck my interest for a couple reasons. First, I find beer history and historical beers to be wildly interesting and a fun challenge in general. Second, I had previously brewed Lichtenahiner’s small, sour German brothers, Berliner weisse and gose, and wanted to have a go at finishing the set. Guess it worked out pretty well!

Boelman: We spend a lot of time developing beer names at Left Hand Brewing Co. With so many breweries springing up and increasing the number of beers being produced, finding an original beer name is tough. Exulansis comes from the Dictionary of Infinite Sorrows (an online dictionary of words that haven’t yet made it to the real dictionary) and is defined as “the tendency to give up trying to talk about an experience because people are unable to relate to it.”

Thiel: The original name for the beer wasn’t exactly marketing-friendly, so I ended up changing it to Just Another Pretty Face. A friend of mine and I also use that as the name of our home brewery, and it is also a lyric in a Grateful Dead song, “Althea.” I tend to jam out while I brew, and the name brings my love of music and brewing together under one roof. 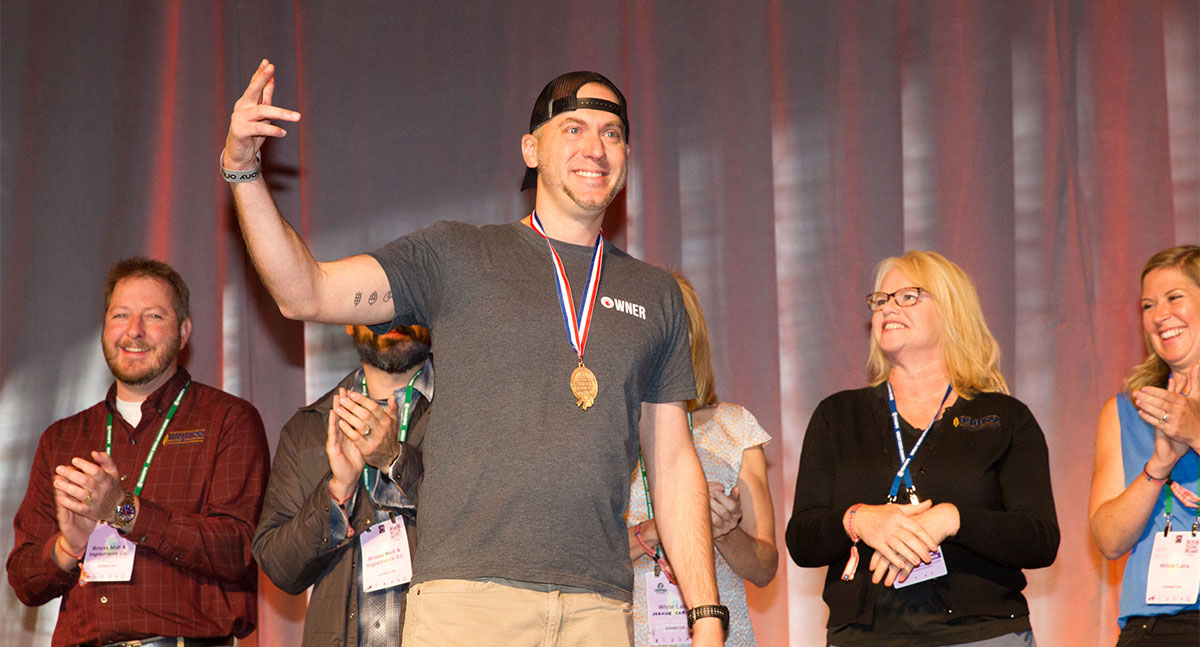 Tomkins: I don’t feel as though I’m in any position to give advice to other homebrewers as I’m very aware of just how many people out there are far more talented and deserving than I am, but the little bit of advice I’m willing to impart is simply to not be afraid to experiment and try different ingredients, methods, and styles!

Boelman: One word: enter. First and foremost, don’t approach a competition with the expectation of pulling down a medal. You should go in with an open mind that you are going to get quality feedback about your beer that you can use to improve something down the road.

I am also a big advocate of joining a homebrew club. I can honestly say for me and my fellow club members (Loveland Weiz Guys and Gals) if you want to take your beer to the next level, you need to find a collective group of like-minded homebrewers who will help each other. My beer and our club’s beer have all been elevated because of this: our small club of 35 people had four beers being poured at GABF this year.

Thiel: Patience is key. Once you think its ready, give it at least another month, or two, or six. And surround yourself with other homebrewers that are putting out great-tasting brew. You’ll learn an amazing amount of information from fellow beer lovers, especially if you are on the newer side. For me, all-grain was as daunting as it could get, but it wasn’t until I was able to watch and listen to a bunch of homebrewers doing a batch that it all clicked.

As for competitions, enter them and enter often. Read the guidelines and then re-read them. The feedback from the judges was great and helped me iron out recipes on numerous brews. When you do make changes to a recipe, make only one change at a time. That way if you don’t like it, you’re not wondering which change you didn’t like.

How To Get Your Great American Beer Festival Presale Code