The Cane Island Alers (CIA) is a homebrew club located in the town of Katy, Texas, a suburb that sits just shy of 30 miles (48 km) west of Houston. The club was established in 2003 and has more than 70 members in the Katy area. The Alers are currently leading the Lone Star Circuit, a points-based series of competitions throughout Texas that recognizes the top homebrewers and homebrew clubs in the state every year. The club also added a new accolade to their list of accomplishments in 2017: being honored by the Texas State Legislature for bringing home the 2017 Gambrinus Club Award.

Texas House Resolution 116 was introduced on July 25, 2017, and was sponsored by three members of the 85th House of Representatives of the Texas Legislature: Mike Schofield of District 132, Cecil Bell of District 3, and John Zerwas of District 28. The resolution passed the House on August 16, 2017. CIA president Andy Scherzinger, and club members Durran Dowdle and Eric Worth appeared to receive the honor on behalf of the club, which states in summary: Congratulating the Cane Island Alers of Katy on winning the Gambrinus Club Award from the American Homebrewers Association. 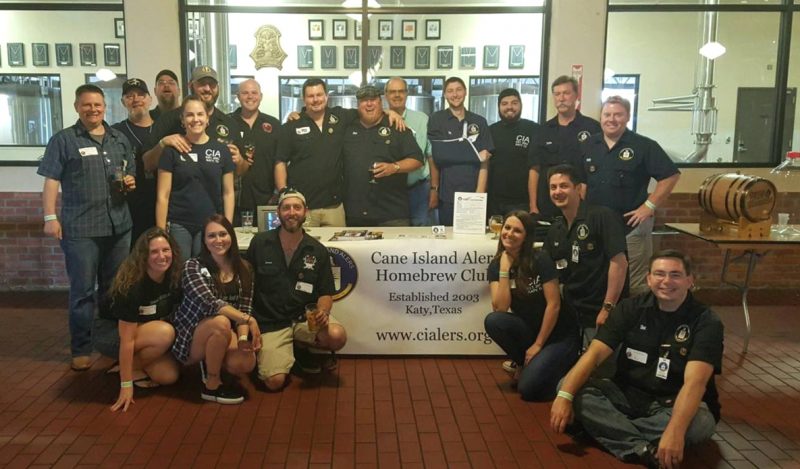 Congratulating the Cane Island Alers of Katy on winning the Gambrinus Club Award from the American Homebrewers Association.

CIA member Ryan DeLaRosa’s “The Olga Milk Stout” won first place in the National Homebrew Competition category 14, Sweet Stout, and fellow club member David Rogers won second place in category 6, Bock, for his “Procrastinator Doppelbock.” Those two medals gave the Cane Island Alers the highest per capita point total of any club in the final round of the competition this year and secured the Gambrinus Award for the Alers.

Rep. Mike Schofield, whose district includes Katy and part of Cypress, congratulated the CIA: “I am proud to honor the achievement of the Cane Island Alers at the largest homebrew competition in the world with House Resolution 116. The resolution is jointly authored by Katy-area Representatives Cecil Bell and John Zerwas. Bringing the Gambrinus Award home is a true testament to their skill, and will add even more depth to the vibrant culture and history of Katy. I have no doubt the Cane Island Alers will continue to bring pride to our community.”

Both DeLaRoa and Rogers were already accomplished homebrewers before their respective first-place and second-place finishes in the National Homebrew Competition this year. The Olga Milk Stout won DeLaRosa a silver medal at the Port City Plunder homebrew competition in North Carolina earlier this year, in addition to gold medals for his blonde ale, pale ale, and IPA recipes at competitions in Cincinnati, Alamo City, and the CIA’s own Operation Fermentation competition in 2016.

Rogers also has won a number of award-winning homebrews, including a Best of Show at the 2011 Big Batch Brew Bash homebrew competition. It was subsequently brewed in collaboration with Saint Arnold Brewing Company and entered into the Great American Beer Festival ProAm Competition that year as Divine Reserve No. 12 Old Ale.

DeLaRosa got his start homebrewing when he bought his first kit from Katy homebrew shop Texas Homebrewers in April 2014. He joined the Cane Island Alers shortly thereafter and immediately became a self-described “obsessed” homebrewer. He is currently in the planning stages of opening his own brewery in his hometown of Dickinson, Texas, another suburb of Houston.

The club recently began using the shop to host their meetings about once a month, which were previously held at No Label Brewing Co. in Katy.

“In addition to our monthly meetings, we occasionally do ‘brew-ins’ at Texas Homebrewers. During these events we like to encourage people who are on the fence about brewing, or who may just want to increase their brewing knowledge, to come out and ask as many questions as they want. I’m sure I don’t have to tell you that pretty much everyone in the brewing community is friendly and willing to help. We also hold occasional BJCP judging classes for those who may want to join the ranks of the beer judging community,” said DeLaRosa on his involvement with the CIA. “In addition to all of that we’re just a good group of friends and drinking buddies.”

You can find the recipe for Ryan DeLaRosa’s gold medal winning “The Olga Milk Stout” in the September/October 2017 issue of Zymurgy.

The inspiration for David Rogers’ Procrastinator Doppelbock comes from a vacation to Germany several years ago when he and his wife stopped in to the Andechs monastery on the recommendation of a friend who promised a “life-changing experience.” It was here that he was first introduced to a beer that can still be found in his refrigerator year-round, Andechser Dopplebock. Upon returning from vacation, Rogers began designing a clone recipe of the beer since he knew that it would be difficult to find locally. The beer he submitted in this year’s National Homebrew Competition was his third iteration of the recipe.

“My intention was to make a doppelbock that wasn’t too heavily bodied, so I kept the OG down to 1.084. The mash temp was held at 153, my standard temperature for mashing. Only one hop addition was made to get me to about 20 IBU. The wort was boiled for 120 minutes, longer than my typical boil of 90 minutes due to the amount sparged from the large grain bill. I used a 5 L starter of White Labs Bock Lager yeast and let it ferment at 53°F for about a month, after which time I kegged and lagered the beer for four months.” Rogers said of his brewing process, “These beers take a little more time to develop, and if you have the patience, you are rewarded with a great result.

Named for King Gambrinus, the (unofficial) patron saint of beer, the Gambrinus Club Award is awarded every year by the American Homebrewers Association to the club that garners the most points per total club entries in the final round of the National Homebrew Competition. Six points are awarded for every gold medal, four points for every silver, and two points for every bronze medal in each style category. The award was presented to the Cane Island Alers during the NHC Awards Ceremony at Homebrew Con 2017 in Minneapolis.