Yes, beer can be part of your healthy diet!

[Editor’s note: The information presented in this article should be used at the reader’s own discretion. Consult with a doctor when evaluating and changing your diet.]

As a certified personal trainer, one of my goals is to help clients, friends, and family achieve healthy and happy lives without depriving themselves of the pleasures of living. The topic of alcohol often comes up at work because I am an admirer of craft and good beer, which has led me to research the benefits and implications of beer in our bodies.

Alcohol has been a controversial topic in the fitness and health industry. Beer has been attacked by some of my colleagues in this area due to the effects of alcohol on the body and the amount of carbohydrates and calories present in it. What many may not know is that beer can be the healthiest option when it is compared with traditional non-alcoholic beverages present in the American diet, if you are over 21 years old of course.

According to Prof. Arne Astrup and his colleagues on “Moderate consumption as part of a healthy lifestyle,” a cold one can be an excellent source of nutrients for our bodies when consumed in moderation: 20 grams of alcohol for men and 10 grams for women is the maximum amount that people should consume daily. When it is translated to beer consumption, that’s about two 250 mL (8 oz.) glasses of 4% ABV beer for men and one 250 mL glass for women (Astrup et al., 2016). One reason for this difference between women and men is due to the enzyme alcohol dehydrogenase. Young male adults (<50 years old) have more of this enzyme, which helps detoxify and metabolize alcohol, than young female adults (Seitz et al., 1993).

Beer is an ancient beverage made of natural ingredients such as barley, hops, yeast, and water. These ingredients infuse our beloved gold liquid with vitamin B complex, folate, silicon, polyphenols, and other vitamins and minerals important to our health. In a study published in the 2007 American Journal of Clinical Nutrition, vitamin B complex deficiency was found to be associated with anemia and cognitive impairment in older adults (Morris et al., 2007). Folate is associated with prevention of cardiovascular and Alzheimer’s diseases, and silicon is important for bone formation and connective tissue health. Long-term consumption of polyphenols can help prevent cardiovascular diseases, diabetes, osteoporosis, and neurodegenerative diseases. Beer also has a healthy ratio of potassium to sodium, which helps keep blood pressure in a normal range. Lastly, beer is typically made of 92% water (Astrup et al., 2016).

Furthermore, the number of calories in a beer depends on its alcohol and carbohydrate content. Two-thirds of the calories in typical beer come from alcohol and one-third from carbohydrates. For example, a 250 mL glass of Pilsner lager contains only 97.5 calories, mainly due to its low alcohol content (Astrup et al., 2016).

So, when people say that people should cut beer to lose weight or to have the desired body, you can answer that it is not the beer itself that is the problem. The problem is that people usually consume more calories than they need, which leads to a positive caloric balance and, eventually, weight gain. It is necessary to pay close attention to the diet in general instead of assuming that cutting only your beer will be enough. If you consume more than two glasses (men) or one glass (women) of beer daily, it would be interesting reconsider it. However, enjoying and pairing a delicious craft beer with your dinner is not going to make you fat if you respect your daily caloric intake.

To further clarify this issue, I compared beer with some common non-alcoholic beverages that people consume in their daily lives. I chose juice. But, is juice not a healthy option? If it is not natural or 100% fruit, the answer is no. According to human nutrition researchers at the US Department of Agriculture, some juices contains as much added sugar as soda, and they are low in nutrients (Zelman, 2015). In fact, added sugars are considered empty calories because they do not contain any sort of nutrients and are high in the glycemic index. They are also linked with high blood sugar and peaks of insulin in our body, which can lead to type 2 diabetes, weight gain, and cardiovascular diseases. Sugar-sweetened beverages (SSB) typically contain approximately 107 calories in a 250 mL container (Malik et al., 2010).  A Pilsner lager contains fewer calories than an SSB, no added sugars, and more nutrients.

Now, you may be saying, “I like Pilsners, but I’d rather have a delicious IPA, stout, or a Belgian ale. Aren’t they more caloric? Are they not healthy then?”

They are indeed more caloric, but they still contain more nutrients than SSBs, especially sodas and industrialized juices. Of course, if your goal is to lose weight, you may need to reconsider your beer options. Or (I like this idea better), pick the beer that you like and try to plan your meals around it. For example, if you decide to drink a strong IPA with a high percentage of alcohol (more calories), you can have a low-carb, high-protein dinner with vegetables to balance your caloric intake. 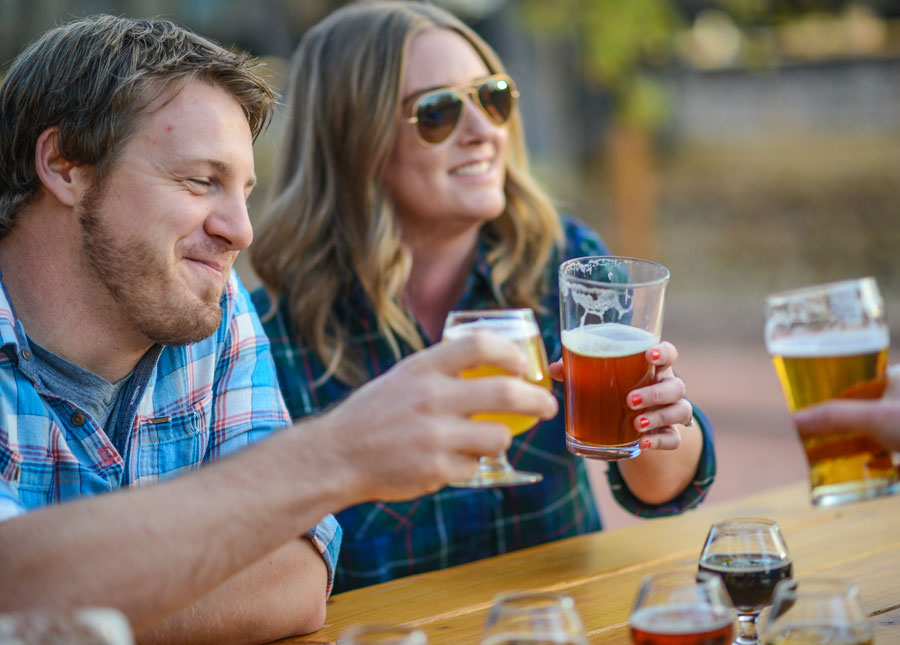 We all know the detrimental effects of high amounts of alcohol in our bodies, but researches have also found links between moderate alcohol consumption and the prevention of certain diseases. According to studies analyzed by Astrup (Astrup et al., 2016), moderate daily consumption of alcohol can increase high density lipoprotein (HDL—the good cholesterol) and adjust insulin sensitivity, which is linked to diabetes and cardiovascular diseases.

In my day in the gym, I advise people not to worry too much about the calories found in food and beverages. In my perception, we instead need to pay more attention to the nutrients and the origin of the product. Try to pick products that are fresh, non-industrialized, and rich in nutrients and vitamins. As my wife and I say, “If you cannot pronounce the name of the ingredient in a label, it should not be good for you.”

We’re picky in the grocery store to find the best food options, and we are really picky when buying our beer. We try to buy and drink craft beers from local breweries. These beers taste fresher and may be healthier due to the ingredients used in their production. Independent breweries have a sense of community and may be more likely to use ingredients from local farmers and groceries stores, which translates to fresher, more flavorful, more nutrient-dense beer.

Part of having a healthy life is to be happy and enjoy it. We should not deprive ourselves of what we like to do, eat, or drink. The key is moderation. Cook more often using fresh and natural ingredients, exercise your body and mind, and, of course, have a delicious craft beer from your local brewery.

Vinicius Mariani is a happily married personal trainer and corrective exercise specialist from Brazil who has a passion for beer and soccer.

When perceiving certain aromas of beer, you may hear people refer to “esters” and “phenols.” …More

Esters vs. Phenols in Beer