Boulder, Colo. • October 19, 2018—The preeminent magazine for homebrewers, Zymurgy® magazine today released the November/December 2018 issue celebrating its 40th anniversary and featuring a new look and feel. First published in 1978 by Charlie Papazian—the “Godfather of Homebrewing”—as he launched the American Homebrewers Association® (AHA), Zymurgy serves the homebrewing community the latest information and advice to support their passion for brewing and drinking quality beer. 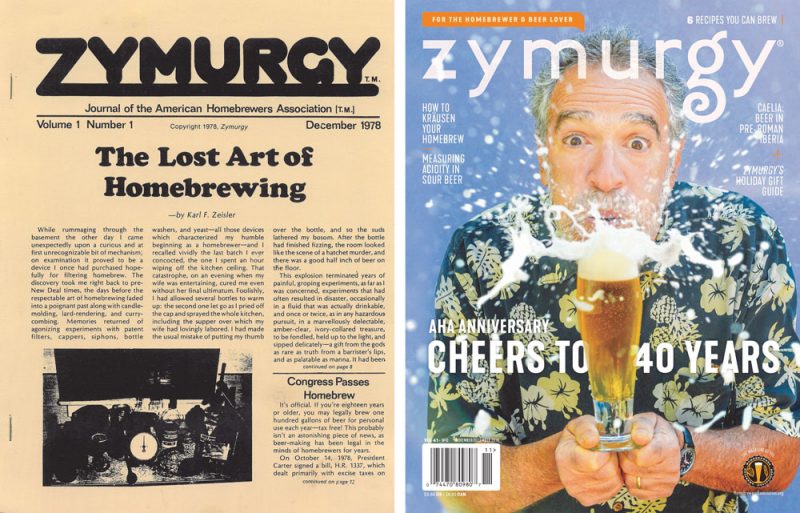 First issue of Zymurgy from December 1978 and the November/December 2018 issue.

“We’ve come a long way from a 12-page stapled pamphlet to the sleek remastered magazine that we are today,” said Dave Carpenter, Zymurgy editor-in-chief. “It’s been 40 years since the AHA printed the very first issue of Zymurgy, sparking a passion for homebrewing that ignited a craft beer revolution. I can’t think of a more fitting way to celebrate Zymurgy’s 40th birthday than to thank all those homebrewers who have made American beer what it is today. I hope you enjoy the refreshed magazine and continue to feel inspired by what you discover inside.”

Zymurgy will continue to publish the annual “Best Beers in America” survey. The magazine is available via AHA membership subscription and at homebrew shops nationwide. Digital Zymurgy archives dating back to 2000, as well as Spanish-language editions, are available via the American Homebrewers Association website.

About the American Homebrewers Association

The American Homebrewers Association (AHA) has worked on behalf of the homebrewing community since 1978 and celebrates a membership of more than 46,000 homebrewers. The American Homebrewers Association organizes events including Homebrew Con™ and the National Homebrew Competition. The AHA also publishes Zymurgy magazine. The AHA is part of the Brewers Association (BA), whose independent craft brewer seal is a widely adopted symbol that differentiates beers by small and independent craft brewers. The BA’s BrewersPublications.com division is the largest publisher of contemporary and relevant brewing literature for today’s craft brewers and homebrewers.

Homebrewing Is Legal, but the Fight Continues