Dean Robb, Chris Harton and Brandon Luehrs all live together in Santa Barbara, Calif. The trio enjoys homebrewing and building projects, so they married two of their favorite hobbies and built a bar in their house. Oh, did we mention that this isn’t your ordinary bar? It comes equipped with a fermentation chamber, an aquarium and a 180° rotating tap because who wants to walk around the bar to fill up their glass?

Chris, Brandon and I all thrive on DIY projects, so it was just a matter of time until we built a bar in our house. The bar began as a simple design, but as ideas emerged, the project became much more involved. A lot of our design decisions were made last minute or during the building process. Originally, the bar was going to feature Brandon’s triple tap kegerator and a smaller refrigerator to act as a fermentation chamber under the bar. However, it took on a life of its own and became something much more.

Prior to construction, I researched many different bar builds and discussed them with Brandon, who’s the most experienced with construction and took a large lead on working out the majority of the design, measurements and cuts needed for the bar.

A few nights before we began building, we conjured up the idea of an aquarium bar. We researched the idea and created a design that included a foam rock wall as the backdrop, and integrated the 30 gallon column-style fish tank as the corner piece of the bar. For easy access and cleaning, Brandon built a cart with wheels and a frame so we could slide the tank in and out. 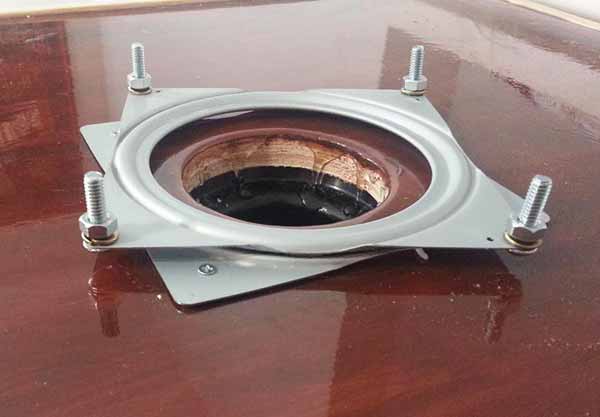 Our last idea was to create a 180° rotating tap for easy pouring. We made a trip to our local hardware supply store and found a “Lazy Susan” ball bearing that fit perfectly in the bar. To prevent the tap tower from endlessly spinning, we build a platform to attach the tap tower to with some cabinetry closures. We then used a toilet flange with a rubber gasket in the shaft to perfectly seal the refrigerator with the hole in the top of the bar. We didn’t know it at the time, but this would turn out to be one of our favorite features of the bar. 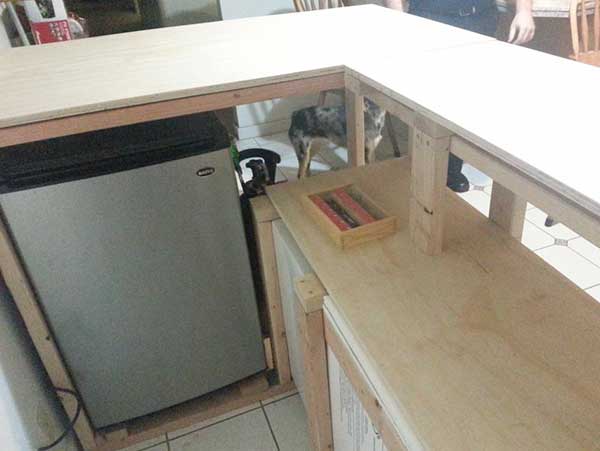 The primary function of the bar was to expand our current kegerator to a bar setting with room for a fermentation chamber. Obviously, things turned out a little different. The rotating tap tower allows us to serve beer while we’re in the adjacent room and the fermentation chamber built into the bar saves us a lot of space and still provides plenty of accessibility. We placed a heating and cooling element with a thermostat in the fermentation chamber to maintain a consistent temperature, as well as computer fans to circulate air inside the chamber and tap tower.

Originally, we thought the fish tank would be an issue, but since it’s on a movable cart, it adds a lot of character to the bar while still giving us easy access to the beer. The foam rock wall was used to hide framing behind the fish tank (we also like the way it looks, too). We built some shelving and placed LED lighting in a series with a dimmer and some trim, along with some metal hardware to hold other beverages. We also created the perfect amount of space between the aquarium and kegerator to store a 20 lb CO2 tank, regulator, power connections, fermentation controller and an aquarium pump. 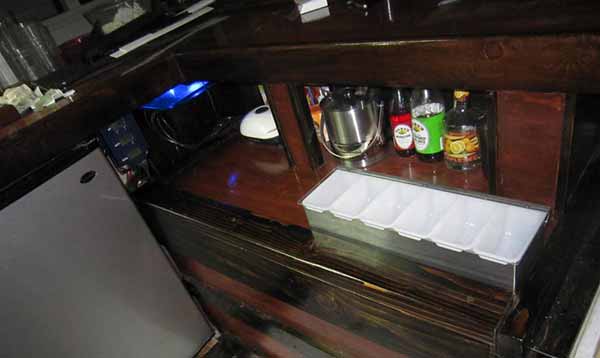 The majority of the bar was built using 2’x4’s, wood screws and plywood to reduce our cost. The most expensive wood we purchased was for the top of the bar. It was cabinetry grade plywood and we were able to cut one sheet for both the bar top and the front sides of the bar with zero waste.

We constructed the fermentation chamber from a mini-fridge that was insulated with foam sheet and lengthened to hold two carboys. We bought a STC-1000 temperature controller to keep fermenting beer at an ideal temperature. We then added computer fans to increase the air circulation. 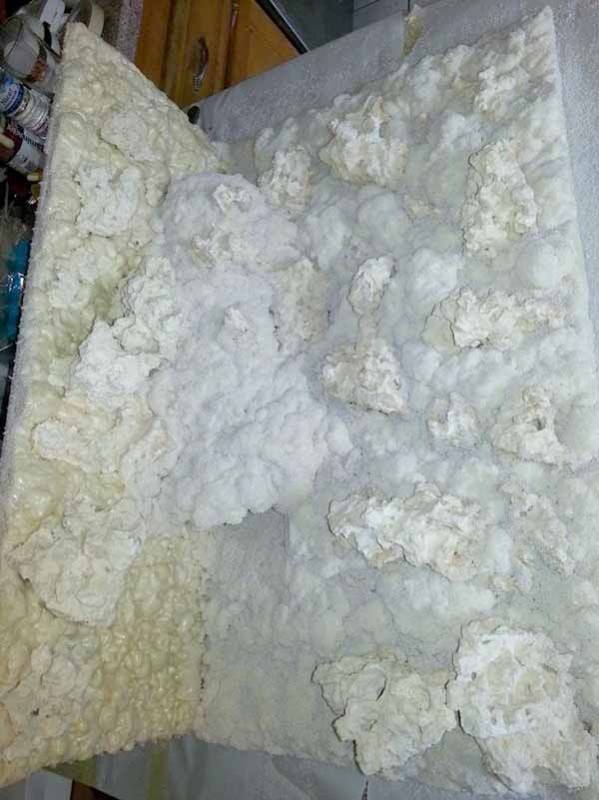 We had to customize the aquarium to the dimensions of the bar. We cut glass, used silicone to bind all the glass together and framed the entire tank with wood for support, which also hid the edges of the foam background. As mentioned earlier, we mounted the aquarium on a cart with caster wheels and framing, and crafted the foam background with plastic lighting diffuser, some live rock, four or five cans of expanding foam, some left over resin from the bar top and aquarium sand. We cut the diffuser and glued it together in a 90° angle with the expanding foam and set it to dry. We then laid pieces of live rock all over the diffuser and filled in the gaps with expanding foam to give it a rough, organic look. After the foam dried, we coated it in a thin layer of resin and then covered in sand. We later added live plants. 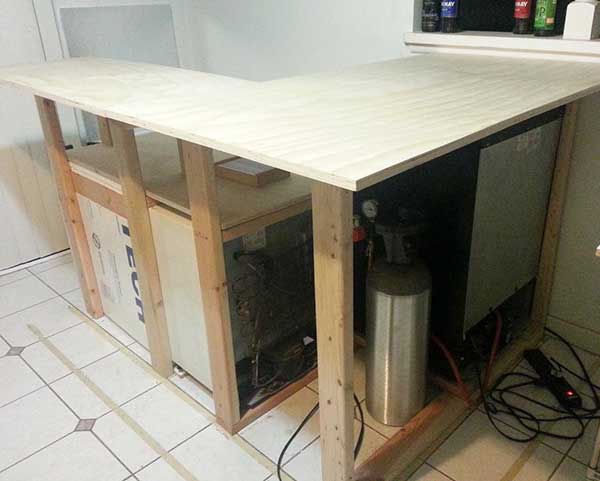 After the general frame of the bar was built, we wanted to put bar rails on it. We decided to build our own rails using a router and heavy sanding, as well as a few miter cuts to create a nice corner on the bar. We spent about $15 on the rails (as opposed to $200) and used the saved money for a professional resin on top of the bar. We counter-sunk all screws, used wood plugs on the bar, and then stained the top and trim of the bar with Mahogany and stained the wood around the bar with Jacobean. We then coated the bar with eight coats of polyurethane while lightly sanding between each coat. We coated the rails 12 times with polyurethane. 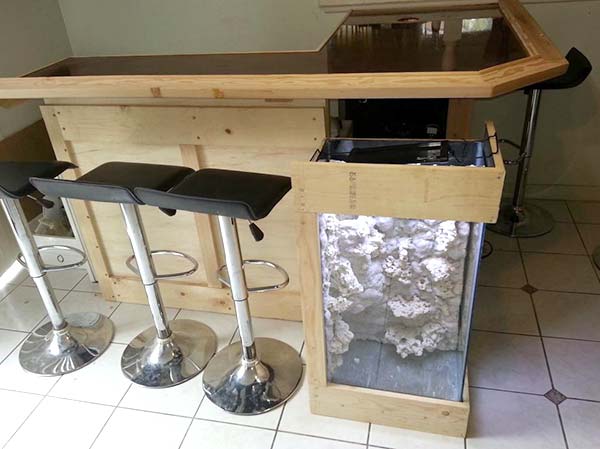 To help preserve the bar, we covered the bar top in 3/16″ layer of west marine resin and cured it with a heat gun to remove any bubbles, which made the top layer scratch resistant and waterproof.

After we completed the bar, we added a panel under the bar top with access to power, USB, HDMI, audio and other connections for charging devices and connecting to the television mounted behind the bar.

There is an incomplete shelf behind the bar that we used left over scrap wood and channeled for LED lighting strips that will connect in a series on a dimmer control. The glass behind the shelf will eventually be replaced with a bubble wall (channels of bubbles going through a thin tank of water with colored lighting).

Brandon, the house brewer, has been brewing on and off for 10 years, and has really shown Chris and I how to brew. We learn more about brewing with each batch of beer. Since we live near San Diego, we love big IPAs, but most styles get a nod somewhere in our rotation.

Our batches are five gallons for now, but we’re getting more involved in all-grain brewing and that will mean more brewing and more experimentation. We also have eight hop varieties growing in our backyard that we hop to use exclusively on some of our beer.