This was actually pretty simple to build, but since I don’t know how to weld I decided to build the base out of unistrut (a metal framing material).  I built the base, and then drilled 4 holes into each corner of the plywood (cut to 8 ½” x 11”) and bolted the plywood to the unistrut base.

I wanted the wort chiller setup to be sturdy and have a carrying handle. I then made the carrying handle/chiller mount using two pieces of unistrut, and bolted them together.  I took a piece of 1 1/2 “ flat steel, drilled a hole in the center to bolt to the unistrut, and I drilled two holes which lined up with the mounts on the back of my chiller. Now it was easy to transport.

Once I had the frame built, I primed it and painted it with Plasti-Dip paint (a moisture resistant, rubber coating paint). It seems to look pretty so far. 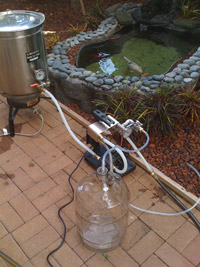 I mounted the march pump to the base with wood screws and it sits slightly in front of chiller. I did this in case any of the tubing leaks. I should probably have made the base a little bigger, and mounted it farther forward, but it works fine as it is. I ran the cord under the base to try to keep the whole unit it bit sleeker looking. I also mounted a switch on the backside, so that I can quickly turn the pump on/off rather than running to plug or unplug it. I put an outlet on the back as well in case I ever need one. I brew outside, so the receptacle I plug into is a GFCI.  *If you make this and brew inside, make sure the outlet you plug into is GFCI protected.

The tubing is pretty straight-forward. I just made sure I used a high-temperature food grade tubing from my brew kettle to my pump, and from the pump to the chiller. Soon, I am going to be adding stainless steel quick disconnects to the tubes, so cleaning and back-flushing will be much easier.

Below, is a list of parts Jamie used to build his own wort chiller:

This is a truly unique wort chiller that Jamie has created. It is great that he gets to make his own beer with the addition of more homemade products. This makes Jamie’s beer that much more unique and individual. Keep up the awesome work and we hope it keeps chilling!