Finding out your beer has off-flavors is a part of learning how to homebrew quality beer. We covered 5 common homebrew off-flavors and how to fix them and received interest in covering a few more flaws. Before reading through the following off-flavors, check out part 1 for an overview of off-flavors and general tips when diagnosing issues.

It’s up to you to determine what the issue is and make intelligent changes to your process to try and prevent off-flavors in the future. Making changes for no rhyme or reason and hoping for the best could possibly introduce even more flaws, so use your brew day note sheets to deduce what caused the issue and work backwards from there.

Movie popcorn, butter and butterscotch are all tell-tale signs of diacetyl. Diacetyl is detectable in both flavor and aroma. While it is sometimes pleasant at very low levels in some English-styles, it is typically considered an undesirable off-flavor for most classic styles. Most often, stressed yeast leak diacetyl during amino acid synthesis causing the butter popcorn characteristic, but it can also be a sign of bacterial infection from things like dirty keg lines.

If the diacetyl flavors and aromas are yeast derived, then you can only worry about preventing the issue in your next homebrew, but if it’s the beer lines, the off-flavor can be fixed by simply cleaning your kegging system.

Assuming it is yeast derived, the biggest effort should be making the yeast as happy and healthy as possible. Be sure to keep wort atop the yeast cake for a sufficient period during primary. Avoid racking to secondary and/or cold crashing too soon. A warmer secondary can also help in prevention, and a diacetyl rest when brewing lagers. As is usually always the case, avoid oxygenating the wort at any point after primary fermentation.

Metallic qualities similar to coins, iron or blood is typically categorized as a a flavor flaw, but often times it is detected also as an aroma and sensation on the palate. This off-flavor is never a preferable quality in beer. Typically, tasting metallic qualities is a sign that unprotected metals were dissolved into the wort. This is not always a terrible thing from a nutritional standpoint, but it is less than pleasant as a detectable characteristic in beer.

To diagnose the issue, you want to first determine where the metals leaching into the wort may be coming from. It is possible that it could come from a scratches in your boil pot, though this is usually only an issue for ceramic-coated steel pots and not aluminum or stainless steel. The chemical make up of your brew water can also cause the coin-like off-flavor. Take a look at your water source report and keep an eye out for high levels of things like iron, copper and other metal-like elements.

Creamed corn, cabbage, green beans, canned asparagus and even tomato juice (typically in darker beers) can be a sign of dimethyl sulfide, more commonly referred to by homebrewers as DMS. The aromatic off-flavor is typically never considered favorable in beer, but in small amounts it can be acceptable in lagers.

In shortened terms, DMS is created when S-methyl-methionine (SMM)—a compound typically reduced in malt during the roasting/toasting process—is reduced during the boil. Malts that have a higher degree of roast have less available SMM, meaning less DMS production in the boil, which is why DMS is very common in light lagers. In other instances where the DMS is found in exceptionally high levels, the cause can be due to bacterial infection.

To prevent DMS in your next homebrew, first ensure you are using proper sanitation measures to confirm the issue was not bacteria derived. If bacteria is not deemed the issue, you can assume DMS was formed during the boil. To lower DMS production in your next homebrew, ensure the wort endures a long, rolling boil with the lid off to allow DMS to be evaporated out of the boil. Quick chilling of the wort after the boil is crucial since DMS compounds can continue to form post-boil when there is less evaporation to carry away the compounds. Also, if your grain bill contains a lot of Pilsner malt, you may want to consider substituting it for another base malt of a slightly higher roast. 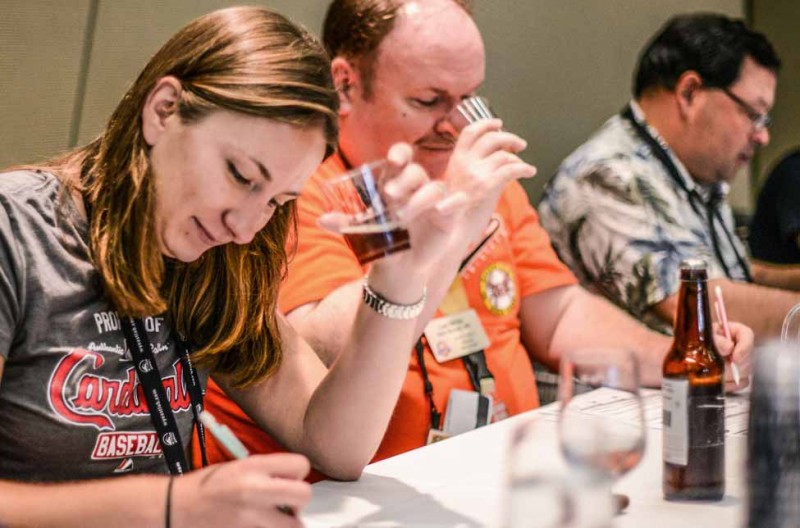 Rotten eggs, sewer gas and sulfur qualities reminiscent of burnt matches is typically caused by hydrogen sulfide and/or sulfur dioxide. The off-flavor manifests itself in the aroma of beer. While rotten egg-like aromas are rarely desired in beer, they are sometimes present in some lagers. This is because certain lager strains are known for producing sulfur qualities. In other instances this issue is caused by poor yeast health or tasting beer while it’s still considered young. Brewing water composition can also play a role in instilling rotten egg aromas, as well as bacterial infection.

Before chalking your brew up as flawed, try to remedy the situation by allowing the beer to age a bit longer. The rotten egg characteristics may subside in time. If not, you’ll have to make efforts to prevent the off-flavor from happening in your next homebrew.

Ensure you are pitching lots of healthy yeast, and allowing the wort to ferment on the yeast cake long enough. That being said, sulfur aroma can be a sign of yeast autolysis which is caused by wort being on the yeast cake for too long. Also consider the possibility of introducing infection into your beer or using water that may be high in sulfides. If all those fail, try a different yeast strain.

Soapy, detergent-like characteristics are perceived in both flavor and aroma, and are never desired traits in beer. The most obvious cause would be soap somehow making its way into the beer. It could simply be a case of using a drinking glass with soap residue, but it’s also possible that scented soaps used to clean equipment like fermenters or beer bottles made their way into the beer. First ensure that your drinking glasses are clean. That’s an easy fix! If that’s not it, you can take steps to prevent the soapiness from tarnishing subsequent brews.

Soapy qualities can also be caused during fermentation. If a beer is left in primary for a long period (note that this length of time is style-dependent) after primary fermentation is complete, the breakdown of fatty acids in trub can cause soap characteristics.

First ensure that you are always thoroughly rinsing homebrew equipment after cleaning them. Avoid using scented cleaners, especially on plastic equipment that may retain the scent and pass it along to your beer. Also take care that beer is not left in primary too long after fermentation is complete to prevent the breakdown of fatty acids.

6 Beer Off-Flavors and How To Fix Them