Update: See part 2 for 5 more common off-flavors and how to fix them.

Having the ability to critique your beer and identify homebrew off-flavors is an invaluable skill when pursuing the highest quality beer.

Let’s take a look at the basics of off-flavors and some of the more common ones that plague homebrews.

A Few things about Off-Flavors

Off-flavors are perceived flaws in flavor, aroma and/or sensation (otherwise known as mouth feel) of beer that are typically caused by some aspect of the brewing, fermentation or packaging process. These are not to be confused with “faults” when analyzing a beer based on specific style parameters.

Keeping careful notes during your brew day will make diagnosing the cause of off-flavors a much more precise experience, rather than simply guessing and hoping for the best. If you know the cause off an off-flavor is either from a botched-mash or mismanaged fermentation temperatures, yet your brew log shows your mash went perfectly, then you can logically assume fermentation was the issue and start to make alterations.

As you will find out below, off-flavors can be caused by many variables, so it often takes some detective work to make intelligent changes that will improve the quality of your next beer. Some flaws will subside by simply allowing the beer to age, while others are irreversible and can only act as a learning experience to improve your next brew day.

Skunky and rubbery flavors or aromas in homebrew can be signs of “light-struck” homebrew. This quality is typically never desired in any style of beer. Beer becomes light-struck when the isohumulone bittering compounds in hops come into contact and react with specific wavelengths of light. Skunky aroma can also be caused by using Cluster hops for late boil additions.

To prevent light-stricken beer in the future, use brown bottles when packaging and store bottles out of the light. In some instances, it only takes a matter of seconds for the reaction to occur and start instilling the undesirable skunk off-flavor.

Also described as “hot” or high in fusel alcohol qualities, solvent-y brew is often characterized by an unpleasant heat from alcohol, and in some cases a burning sensation on the palate. It can be perceived in flavor, aroma and mouth feel. In some stronger beer styles, perceivable alcohol is expected at certain levels. “Hot” beer can be caused by fermenting too warm, not using enough healthy yeast or simply the beer being young.

To address solvent-y beers, first try simply setting the flawed beer aside and giving it time. Sometimes beers need longer aging periods to round out flavors and aromas. If time does not fix this issue, you can take measures to prevent this from happening next time you brew the recipe. Depending on what your brew day notes dictate, consider cooler fermentation temperatures, more viable yeast cells or even a different yeast strain altogether. 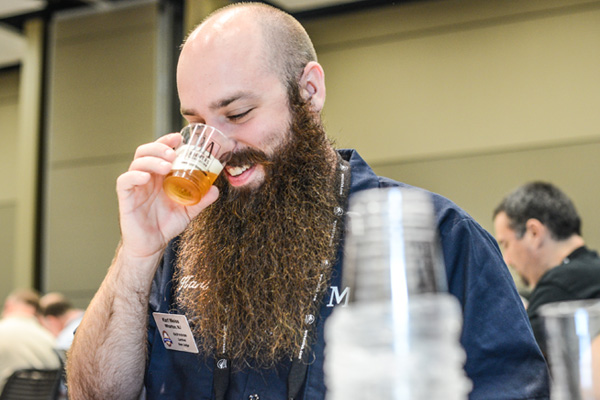 Green apple or cider-like characteristics can be tricky. To the untrained palate you may think this is just an interesting fermentation by-product that gives your beer a little fruity zing, especially in the aroma, but the reality is it is rarely an intended characteristic in beer. This off-flavor is caused by acetaldehyde, which is a compound formed during fermentation as precursor to alcohol. It typically increases in amount during fermentation and then decreases as beer conditions and ages.

Acetaldehyde is a key signifier of young (also known as “green”) beer, so often times the issue is remedied by simply allowing the beer to condition longer. Krausening, a traditional German technique, can also help clean up acetaldehyde in beer. If additional conditioning time or krausening does not work, in your next homebrew ensure the appropriate amount of viable yeast is pitched, the wort is adequately oxygenated and the fermenting wort is left on the yeast longer.

Astringency is usually identified as a harsh bitterness sensation to the palate, which can be accompanied by some grainy, husk-like flavor. This off-flavor can be misinterpreted as hop bitterness, though with some practice it becomes easier to discern the difference between the two. Typically astringency is caused by tannins derived from brewing ingredients, particularly grains. Control the amount of tannin extraction, and you can reduce the chances of astringency.

To prevent astringency in your next homebrew, a few measures can be taken when using certain ingredients. Astringency is often derived from the mash, hence the grainy, husk-like flavors that sometimes appear with the harshness. Check your crush and ensure you are not pulverizing your grains too much, and keep the mash pH under 6. High amounts of dark-roasted specialty grains, whole-leaf hops and certain raw spices can also increase astringency levels.

Beer that has been oxidized can instill aromas and flavors reminiscent of cardboard, wet paper or just a general “stale” characteristic. While oxidation can sometimes take the form of sweet and sherry-like qualities, adding depth to some styles like barley wine or old ale, it is rarely a desired trait in beer. Unfortunately, once oxidation occurs it is unable to be fixed, but steps can be taken to prevent if from happening in your next homebrew.

The key to preventing oxidized beer is avoiding the introduction of oxygen after fermentation. In fact, in most cases you should avoid aerating wort after the oxygenation at the time of pitching the yeast. Oxygen is initially important to yeast because it consumes it to aid in growth and preparation for the fermentation ahead. Once the yeast gets to work, their consumption of oxygen decreases, which is why it’s important to avoid aeration. To do this, ensure the wort is not splashed or agitated after fermentation, especially when racking. Keep airlocks full. Ensure fermenters, kegs and bottles are all sealed airtight. And if possible, purge kegs, bottles and fermenters with CO2 before racking fermented wort into them.

6 Beer Off-Flavors and How To Fix Them