This is part 1 in The Beer Off-Flavor Series by Drew Beechum. Catch Drew at Homebrew Con …More

This is part 3 in The Beer Off-Flavor Series by Drew Beechum. Catch Drew at …More

This is part 2 in The Beer Off-Flavor Series by Drew Beechum. Catch Drew at Homebrew Con …More

This is part 4 in The Beer Off-Flavor Series by Drew Beechum. Catch Drew at Homebrew Con 2019 where he’ll be presenting “Brewing Simple: Great Beer with Less Effort and More Fun.”

“If you like creamed corn–flavored beer, than you’re going to love DMS,” said no one ever.

Dimethyl sulfide (DMS) is an off-flavor commonly found in lighter-colored beers, and there’s a reason for that! 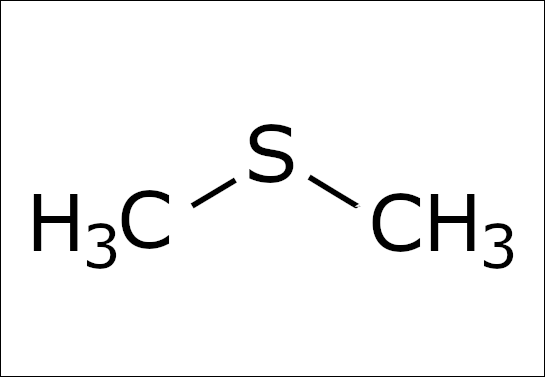 Some even associate the taste of DMS with shellfish.

There is one reliable—or at least it used to be reliable—example of DMS: Rolling Rock. The version of Old #33 brewed in the Latrobe facility would be overflowing with DMS the second you popped one open. I have not had it since Anheuser-Busch InBev (ABI) moved production to Newark, so your mileage may vary.

S-methylmethionine (SMM) is the precursor compound that gets transformed into DMS by various means. SMM comes from the malts we use in our beers. Traditionally, pale, lightly kilned malts (e.g. Pilsner or pale malt) carry more SMM since kilning drives the levels down in darker-colored malts.

During both the mash and the boil, SMM is converted into DMS and its cousin dimethyl sulfoxide (DMSO). This conversion happens above 85°F (29°C), so DMS is even still being produced while the beer is chilling after the boil.

Solution: Tradition dictates that when brewing with very pale malts, you should remove as much vapor as possible since SMM/DMS is volatilized by the boil. This is part of the reason you’ll hear the advice to conduct a vigorous boil without the lid on.

[ZYMURGY MAGAZINE: To learn more about when you do and don’t want long, vigorous boils, see “Advances in Wort Boiling” in the May/June 2019 issue.]

DMS is also formed after the boil during chilling when the wort temperature is still hot. Chilling fermentation/room temperature as quickly as possible will reduce the amount of DMS formed. (Or alternatively, throw a ton of hops in the whirlpool—who’s going to smell DMS behind all that Mosaic, Galaxy, and Citra?!)

Modern, light-colored malts seem much more forgiving when it comes to DMS production. Brewers can get away with a more closed boil, and homebrewers using underpowered stoves don’t have to worry as much about a rigorous boil. 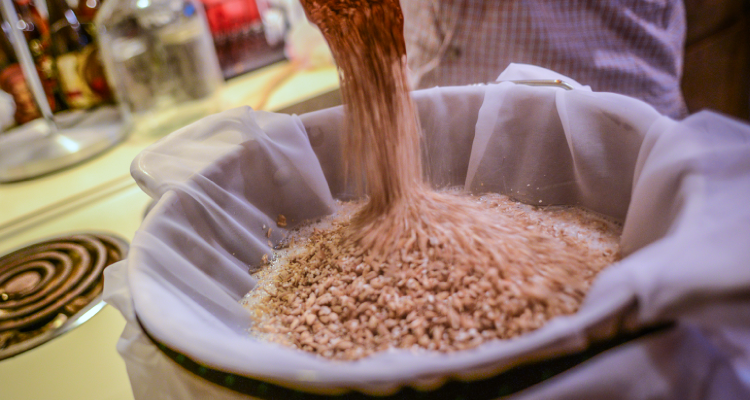 Lightly-kilned, pale malts have higher levels of S-methylmethionin, the precursior to DMS, than darker malts.

Some yeast strains can take DMSO that remains in the beer and strip the oxygen molecule, creating DMS. While we can smell DMSO usually as a garlic/onion type of aroma, we’re more sensitive to DMS, so a little DMSO conversion goes a long way.

Solution: There’s no clear signifier that makes a yeast strain susceptible to DMS production, at least that I’ve found. If you feel your DMS problem is due to the yeast type, ensure a full fermentation so the CO2 production can help scrub out the DMS.

A continuing theme for our off-flavor series: poor yeast health and management can lead to perceptible off-flavors. If the yeast you pitch is not up to task or it is not given the proper environment in which to thrive, it will not be as efficient at scrubbing DMS from your beer.

Solution: Use healthy yeast and foment a furious ferment. The CO2 produced during fermentation will help scrub out the DMS. Also, be sure to manage the fermentation in the temperature and time ranges suggested by the yeast manufacturer. 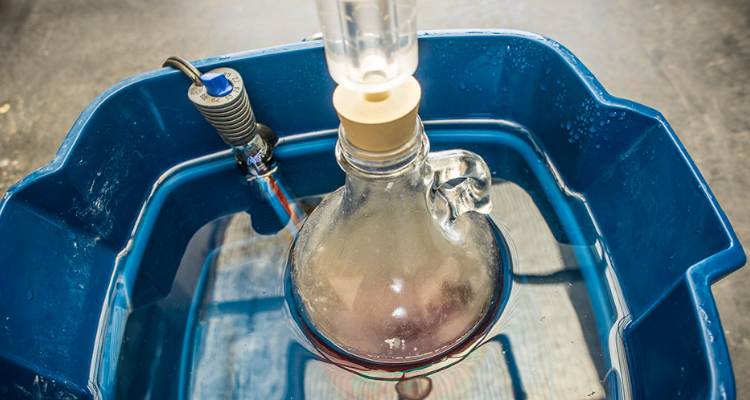 CO2 blowoff helps scrub DMS during fermentation. Start with a healthy pitch of yeast and manage the temperature in the target range.

Bacterial contaminants love to play merry hob and produce all sorts of off-flavors. Contamination from unwanted bacteria can be introduced at any point in the brewing or fermentation process after the boil.

Solution: Review your sanitation practices. Ensure all equipment is thoroughly cleaned of debris and then sanitized if it will come into contact with the beer any time after the boil. Also consider replacing plastic and rubber equipment that may harbor bacteria in scratches and cracks.