We’d be fools to think hop madness wouldn’t come full circle into other areas of home beverage making. Hop wine, anyone? Eh, maybe not. But, dry-hopped cider is all the rage, and cidermakers far and wide are trying to find that delicate balance between hoppy aromatics and apple sweetness. Lucky for us, making cider takes close to no time and dry hopping is a bonus for another day.

I chatted with a couple of experts on the topic of dry hopping cider from Colorado Cider Company, Stem Ciders, and Yakima Chief – Hopunion (YCH) to gather their collective insight on making a balanced dry-hopped cider.

It all starts with picking the perfect hop variety to complement your cider. Ian Capps at Stem Ciders emphasized that very few IBUs will be extracted since cider must (the term for unfermented cider) is typically not boiled. In other words, the hops will primarily contribute flavor and aroma, just as is the case when dry hopping—adding hops during or after fermention—beer.

Capps likes to pair a particular hop characteristic with a fruit: think Citra-hopped cider with some fresh grapefruit puree. At Stem, they focus mainly on fruity and citrusy hops like Cascade and Citra that are less dank, so that the apple flavor of the cider is not masked. That feeling was widespread, with both Colorado Cider Company and YCH saying they also prefer to use hops with a fruity or citrusy profile when dry hopping cider. In fact, YCH says their cidermaker clients tend to stick with Citra® and Mosaic®.

Hops typically come in whole-leaf form or as compressed pellets. Either can be used for dry hopping, though whole-leaf hops are often avoided since they absorb more liquid and have less contact area with the beer, which requires more agitation to get the full potential of the aromatics. YCH recommends their LupulN2® hop pellets, which have less vegetal material than cones and allows for emphasis of the fruity characteristics. 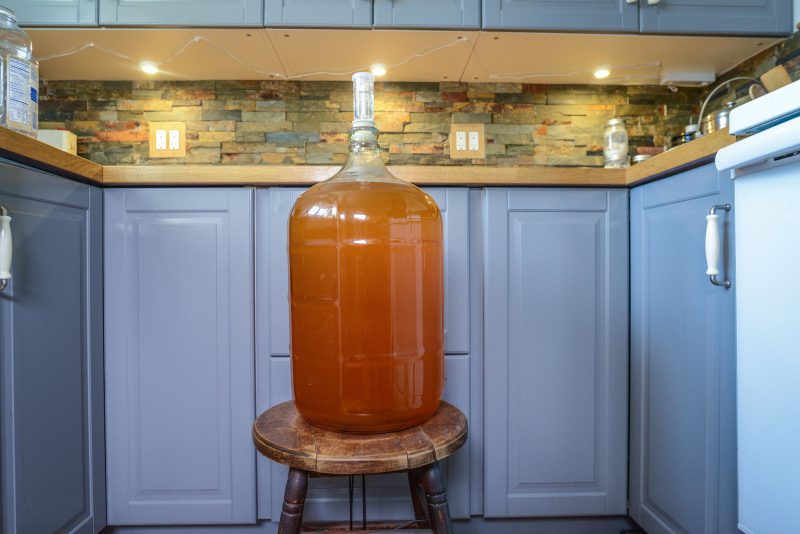 Dry hopping cider (or beer for that matter) is a bit of a guessing game. Depending on when the hops are added to the fermenter, how much is used, and how long they are soaked will all determine the amounts of aromatics that are imparted in the cider. Colorado Cider Company typically adds hops when the cider is room temperature and has experimented with dry hopping for anywhere from 7 to 21 days. Others have had success with even fewer days. In fact, Capps says to be wary of soaking them for too long, which can add vegetal qualities that aren’t typically desired.

Use the following recipe as your base cider, and experiment with the hopping techniques described in this article. You can also find a slew of cider and perry recipes on the AHA Homebrew Recipe section.

Depending on what kind of result you want, the quantity of hops per gallon can vary quite a bit. Stem Ciders scaled down what they typically do to a 5-gallon batch, which came out to approximately 0.25 oz. of hops per gallon. Another thing to consider is that you’re making up for lack of bittering, so Page from Colorado Cider recommends using double what you’d normally use in a dry-hop addition.

In any case, keep track of your dry-hopping method so you can make tweaks to future batches based on the results.

Other Tips and Techniques

It never hurts to give your hops a good sniff to look for signs of oxidation and to be sure that they’re fresh. Cheesy smell? No bueno—toss them! Brad Page at Colorado Cider Co. reminds us that the acidity of cider has a different effect on hops than beer does, so don’t expect that your cider’s hop character will be the same as that of your beers.

Finally, the consensus among cidermakers is generally that there isn’t a place for bittering hops in cidermaking. Dry hopping alone adds some bitterness, and you may even have to back-sweeten so you can still taste the apple flavor. Brad from Colorado Cider says they even use adjuncts to mimic bitterness, like lemongrass in their Grasshop-ah Cider, so that the apples really shine, which is, of course, what cidermaking is all about.