How To Make Beer

There are four main ingredients in making beer: malt, hops, yeast, and water. Familiarize yourself with each ingredient and learn to use adjuncts and finings to expand your repertoire of recipes. Remember, this is just a brief overview. For more information on each ingredient, expand the Further Reading section for each ingredient or Get the Book!

Malt is the principal source for fermentable sugar in beer. Raw, brewing-grade barley undergoes a germination and kilning process by malt manufacturers to prepare it for brewers. In other words, malt is barley that has been sprouted and dried.
Every combination of roasting time, temperature, pH, concentration, sugar, and nitrogenous compounds will create a different set of flavor chemicals in a malt. Base malt refers to the majority of the malted grains used to make beer while specialty malts (e.g. chocolate malt) have a more dramatic impact on the flavor, mouthfeel, and color of the beer. Utilizing specialty malts is a relatively easy way to add more depth and character to extract brews.

Agricultural historians believe that the barley grown across Europe in the early Middle Ages was mainly six-row. The genetic ancestors of two-row types grown in Europe were likely brought back from the Middle East during the Crusades.

Malt: A Practical Guide from Field to Brewhouse 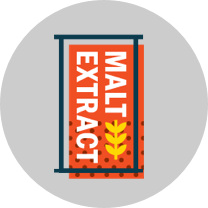 Malt extract is concentrated sugar extracted from brewing-grade malted barley and comes in both dried (powder) and liquid (syrup) forms. Extract lets brewers skip the mashing process needed to brew with grains and takes you straight to the boil.

Various types of malt extract are available, such as pale, wheat, and amber. Today you’ll even find specialty extracts like rye and Maris Otter. The specific type to use in a brew depends on the desired style of beer.

Malt extract is made by mashing grains to make wort. The wort is then concentrated from its original gravity to a thick syrup by evaporation under gentle heat, typically under vacuum.

More than just resembling rabbit food in pellet form, hops are the green, cone-shaped flower of the hop plant that are used to add balance, flavor, and aroma to beer. Hops contain specific amounts of alpha and beta acids, as well as essential oils broken down in boiling wort that give many beers their signature bitterness, flavor, and aroma.
You may also use a technique called dry hopping, in which hops are added after fermentation for added aroma and flavor. Aside from the added flavors hops lend, they are also an excellent preservative of beer.

The genus Humulus likely originated in Mongolia at least six million years ago. A European type diverged from that Asian group more than one million years ago; a North American group migrated from the Asian continent approximately 500,000 years later.

For The Love of Hops: A Practical Guide to Aroma, Bitterness and the Culture of Hops

Brewer’s yeast (Saccharomyces) is a type of fungus that consumes fermentable sugars in the wort and creates alcohol and carbon dioxide as a byproduct, a process known as fermentation. The nuances of fermentation come down to the type of yeast used, primarily ale or lager yeast.
Using two different types of yeast in the same wort can create drastically different beers. Other than alcohol and carbon dioxide, yeast strains produce other compounds like esters, fusel alcohols, ketones, and various phenols and fatty acids, all of which contribute to the character of a beer.
Wild yeast and bacteria like Brettanomyces (Brett), Lactobacillus (Lacto), or Pediococcus (Pedio), are either very favorable or avidly detested by brewers due to their reputation as contaminants. While these yeasts and bacteria can pose a high risk for cross-contamination, the unique flavor and aromas they produce can outweigh the risk and extra effort in certain kinds of beer. Just be careful! It’s typically recommended maintain separate equipment for “clean” beers and “wild” beers to prevent cross-contamination of future batches.

A single yeast cell is about 5 to 10 microns (0.0002–0.0004 inches) in size and round to ovoid in shape. And although a yeast cell is ten times larger than bacteria, it is still too small to be seen by the naked eye. In fact, it takes more than ten yeast cells to equal the diameter of one human hair.

It may seem like an obvious ingredient, but because water makes up the vast majority of beer, it’s a critical one. There are four key aspects of water that relate to homebrewing: pH, hardness, alkalinity and residual alkalinity, and “flavor” ions. All four aspects affect brewing.

The colloquial terms “hard water” and “soft water” come from the cleaning industry. The term “hard” means that it is hard to raise a lather due to the chemical binding of the soil-binding sites in soaps by calcium and magnesium ions.

Water: A Comprehensive Guide for Brewers

Adjuncts are another source of fermentable sugars for adding alcohol to your homebrew. Adjuncts are often used as a cheaper alternative to malted grains or to produce a lighter, less malty beer, but they can just as easily lend their own unique character to beers brewed with them—oatmeal stout, anyone?

Rice has been used as a brewing adjunct in the United States and Britain since the 19th century. Varieties of rice used specifically for brewing are bred to have nearly no flavor or aroma.

A fining agent is a compound added to beer to improve clarity. Fining agents work by attaching themselves to contaminants and cause them to rapidly settle to the bottom of the fermenter. They may be added either at the end of the boil or in the fermenter, depending on what fining agent is used.

Check out the most comprehensive directory of homebrew shops for your ingredients on the next brew day.

Find a Homebrew Supply Shop Near You

There are over 2,100 AHA registered clubs in the United States and around the world. Find and join one close to you, meet your homebrew community, and become a better homebrewer.

Find a Homebrew Supply Shop Near You

Biweekly fermentation inspiration in your inbox!