Having helped my father homebrew for the better portion of my life in our pseudo home brewery, the Barberton Brewing Company, I knew how to wash and dry bottles. He had brewed since the early nineties, and in some way, shape, or form, I had always helped him out. After I started brewing on my own in college, I grew sick of cleaning bottles like many brewers do. So, I made the switch to kegging and jumped down the rabbit hole of kegerators.

My kegerator is different than most. My kitchen fridge that had run more or less continuously for the better part of the previous four decades finally crapped out. That meant my garage fridge would soon be my kitchen fridge, and I would be out of a place to put my delicious homebrew. I had the opportunity to get an old True Refrigeration Worktop Freezer from an old bar in my hometown–a friend of mine had kept it in his basement for years, and after poking and prodding him for several months, I finally convinced him to sell it to me.

The True Freezer needed a bit of TLC. I soaked the condenser, which was full of greasy, dusty gunk, in a slurry of Blaster Degreaser, and I blew out the loose bits with an air attachment. The fan needed cleaning and some wires had to be replaced, but other than that, the freezer ran perfectly. I needed to control the unit’s temperature so as not to freeze my tasty homebrew, so I downloaded plans for a temperature controller from the Homebrewers Association’s website and I was set. 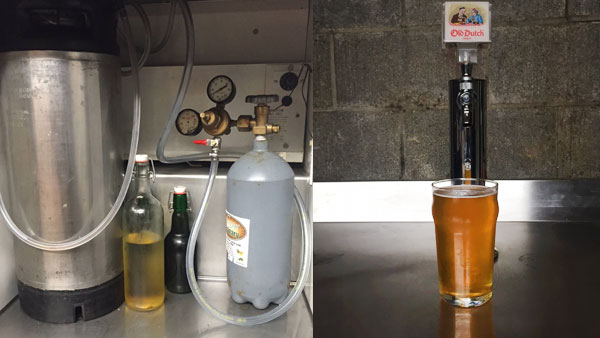 I used a picnic tap for a while, but I knew I wanted something more professional and cleaner looking. So, I ultimately bought a single draft tower online and mounted it to the top center of the freezer (slowly drilling through the top with a hole saw), which is stainless steel with a foam core. The draft line goes directly to the liquid post on a pin-lock keg, and the tower is insulated with foam to keep the beer line chilled.

I have plans to wire the digital temperature controller inline and mount it flush to the backsplash, and I want to mount the CO2 bottle outside for ease of adjustment. But, I am trying to figure out the best way to route the gas line and insulate around the opening.

I wanted to have a clean, professional-looking kegerator, and as of today, my homemade fridge has been running strong for over a year. The Barberton Brewing Company finally has beer on draft!