Do beer drinkers build up a resistance to hops? It’s a question that’s surrounded by controversy and uncertainty, with experts from all over giving their input on the matter. In 2005, Vinnie Cilurzo at Russian River Brewing coined the phrase “lupulin threshold shift,” to describe when a once extraordinarily hoppy beer now seems pedestrian.

Hops are wonderful. Believe it or not, there was once a time when beer wasn’t hopped. Instead, medieval brewers used spices, flowers and other herbs to give beer flavor (think gruit). In the 13th century, brewers started using Humulus lupulus (female hops) to improve flavor and aroma, which soon became commonplace as it improved beer’s head retention and shelf life. Today you’d be hard-pressed to find a beer that was made without hops.

Our ability to taste bitterness evolved as a way of detecting poison. It’s interesting that we’ve developed an acquired taste for bitter food and drink as it seems rare elsewhere in nature. Is it this contrast that has driven us to crave a good IPA? 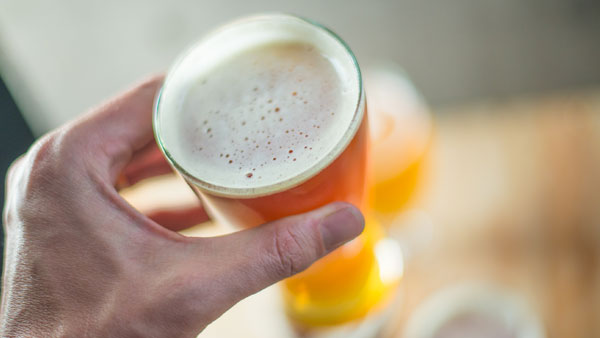 Because of the lupulin threshold shift, it seems as though we’ve built up a tolerance to hoppiness and bitterness. Beers that once impressed you with their flavor, bitterness and hoppy aroma don’t seem as interesting or have the same punch that you’ve come to expect and desire.

Two years after Cilurzo coined the term, it came up during a Q&A session at the First International Brewers Symposium. Following a presentation detailing results of research related to bitterness quality, an attendee explained the concept of lupulin threshold shift to Tom Shellhammer and drew an analogy to spicy food. “When you get used to hot food you have to put in more and more spice to get the same perceived spicy heat; the same analogy applies to beer and bitterness, in my opinion,” he said.

1. When a once extraordinarily hoppy beer now seems pedestrian.

2. The phenomenon a person has when craving more bitterness in beer.

3. The long-term exposure to extremely hoppy beers; if excessive or prolonged a habitual dependence on hops will occur.

[LISTEN: A Contrast and Comparison of the Many Variations of India Pale Ale]

Shellhammer replied: “I use the same analogy to describe temporal and qualitative effects of bitterness. For instance, the heat from ginger is different than the heat from chili peppers. But in regard to what you described as lupulin threshold shift, we don’t see a shift in how the panelists perform over time.”

However, human olfactory psychophysics, the study of how humans perceive odors, indicates that the impact of an aroma may change. Andreas Keller and colleagues at Rockefeller University discovered that the perceived smell of an odor at a given concentration changes over time and depends on prior experience. In other words, the more you’re subjected to a smell, the more you adapt to it, thereby raising the threshold of that smell. Although this does not completely apply to nonvolatile bitter components, it has been shown that the brain, smelling hoppy aromas, expects a more bitter drinking sensation, or a lupulin threshold shift.