More than 12,000 people at 483 registered sites around the world participated in this year’s Big Brew for National Homebrew Day on Saturday, May 7. The American Homebrewers Association (AHA) began Big Brew in 1998 as a way to bring the homebrewing community together, and now, in its 18th year, Big Brew is bigger than ever.

Although the AHA orchestrates Big Brew at the national level, the event is truly a celebration of local homebrewing communities. At sites organized by homebrew supply shops and clubs, microbreweries, restaurants, craft beer retailers, and even several regional chambers of commerce, participants collectively brewed 2,363 batches of beer totaling an estimated 17,804 gallons. Forty-eight states and 12 countries were represented at Big Brew 2016.

Brewers were encouraged to brew a batch of beer to commemorate the Reinheitsgebot, which turned 500 years old this year. The Reinheitsgebot—commonly referred to in English as the “German Beer Purity Law”—was enacted in Bavaria in 1516 as a way for lawmakers to control the price of grain. It outlawed the use of any ingredients besides barley, water, and hops in the brewing of beer (it was later adapted to include yeast). The Reinheitsgebot’s impact on brewing history is still felt today, and the AHA published this year’s recipes as a way to both salute its anniversary, and to celebrate homebrewers’ creative freedom in their own brewing processes. 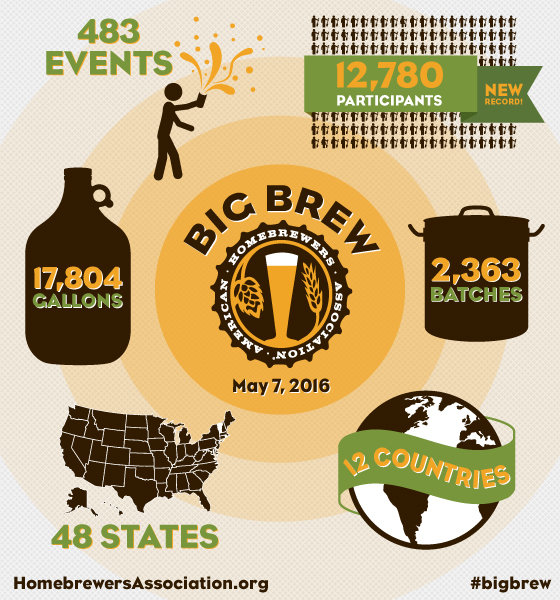 The AHA was also excited to support the growth of homebrewing worldwide by publishing the Big Brew recipes in Spanish for the first time this year. The international community responded enthusiastically, with Big Brew celebrations all over the world reporting participation in the thousands.

This year’s Big Brew for National Homebrew Day drew a record number of participants as homebrewers worldwide participated in the annual simultaneous toast at 12 p.m. CDT.

Though this year’s celebration may already be in the books, it’s never too early to mark your calendars for next year’s Big Brew on Saturday, May 6, 2017!