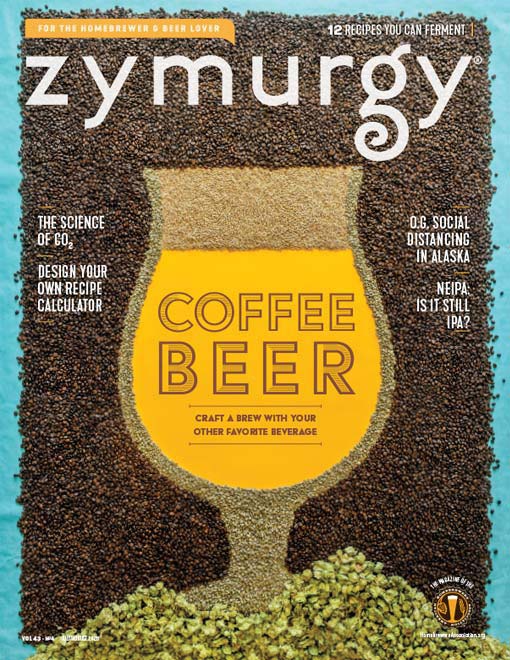 The July/August Zymurgy is now available! Check out the featured stories, such as Coffee Beer: Brew With Your Brew, Carbon Dioxide: It’s a Gas, Homebrewing One Spreadsheet at a Time, and more in the new issue.

Access this issue and 20 years of digital archives for $4.99/month

This Zymurgy issue is brought to you by Brewers Publications

Brew with Your Brew

Brewers and baristas often start their days similarly—before the sun rises, coffee in hand. We don’t know who first had the idea to mix coffee with beer, but we’re glad they did. From roast to extraction, learn how to infuse your beer with the best of the bean.

Odorless, colorless, and tasteless, carbon dioxide is a simple molecule—just two oxygen atoms connected to a central carbon atom—but its interactions with water, beer, and other gases can be complex and interesting. Your beer wouldn’t be the same without it.

What goes on behind the scenes in those “black box” brewing calculators? How do they go from a list of malts and hops to values for gravity and bitterness? Building your own calculator is easier than you think, and it can teach you a great deal about your beer.

By Efrain Villa John Netardus is self-isolating. He has not been outdoors in several days, at least not in the way Alaskans in his community near the Chena River are […]

Recipes in this Issue

Dave brewed his first batch in 2009 and started writing about beer soon thereafter. In addition to geeking out on beer and language, Dave enjoys hiking, traveling, and other gerunds as well. Email Dave