Over the past few decades, beer has reclaimed its rightful place as both ingredient and accompaniment in private and professional kitchens. Beer for deglazing a pan, steaming mussels, mopping a roast, or providing substance to a beef stew has long ceased to be a novelty. But Michelin star chef Werner Licht of Haralds Kochschule in Munich, Germany, has taken the concept of beer cuisine one tricky and daring step further…into the forbidden realm of reductions!

Classic reductions are usually clear sauces, such as velouté or sauce espagnole, “reduced,” after patient boiling, from white or brown stock, bouillon, or consommé—usually with a hefty portion of wine, and always flavored with herbs and spices.  They are then strained, and served hot or cold, and sometimes jellied. Their concentrated flavor and velvety smoothness can transform even an ordinary dish, such as a humble hamburger, a simple steak or pork chop, or a delicate white fish, into a sublime one.

Chef Licht agreed to share some of his magical beer reduction methods with Zymurgy readers. Following are recipes for an eggplant and chèvre (goat cheese) terrine, a monkfish filet, a veal roast, and an ice parfait with apricots—all of which show off the “haute” flavor potential for reductions made not with wine, but with beer.

The technique for making reductions grew out of the French saucier tradition. The classic reference model for all reductions is without a doubt Georges Auguste Escoffier’s demi-glace (“half-glaze”), which was first published in his 1903 cookbook Le Guide Culinaire. This sauce is a rich, deep, meaty glaze, the essence of brown stock (fond brun or estouffade in French) that has been concentrated from water, marrow bones, a mirepoix (a finely diced mixture of carrots, onions, and celery), a bouquet garni, and some optional red wine. It is reduced three times. During the first reduction, the volume shrinks by 90 percent or more. At the end, the solids are strained and discarded. For the second reduction, a brown roux (a slow-cooked mixture of flour and butter) is added, as well as more mirepoix and some tomato puree or paste. At this stage, the brown stock becomes a sauce espagnole. During the final reduction, the sauce espagnole is mixed with fresh brown stock, flavored with a new bouquet garni, and often finished with a good dose of sherry. This basic demi-glace technique by Escoffier is also at the heart of a good beer reduction.

The Two Sides of Bitter

In classic reductions, however, all liquids and ingredients differ from beer in one key variable: Beer contains alpha-acids, that is, non-volatile hop resins. In the beer we drink, of course, these provide a pleasant balance to beer’s malty sweetness; but when we condense beer in a beer reduction, the bittering that is so pleasing in an IPA is likely to become overbearing in the concentrated sauce. This is particularly noticeable in beers that are flavored with strongly piney, pungent, or citrusy hop varieties such as Ahtanum, Amarillo, Cascade, Chinook, Columbus, Simcoe, or Tomahawk.  To ensure that the reduction does not become too acrid and assertive on the palate, or even inedible, the selection of beer is paramount. 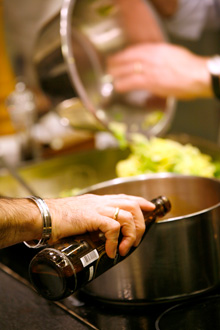 While heavily hopped beers—such as IPAs or anything labeled “imperial” or “double”—can be used in sauces in small quantities, more like a spice, or as a deglazing medium in a pan to dissolve savory meat juices, they are not suitable for reductions. Instead, select only mildly hopped brews, and make sure they are also malt-accented. Beers flavored with UK Golding-like or German Mittelfrüh-like hops are best suited for reductions.

Most industrial mass-market beers, however, in spite of being fairly low in hop bitterness, are usually not suitable. This is because they are frequently made with rice and/or corn adjuncts and thus lack the required counterbalancing maltiness. Reductions made with such beers simply have no body and taste too empty. The best beers for reductions, therefore, are such classic Bavarian styles as Helles, Märzen-Oktoberfest, Dunkel, Hefeweizen, Kellerbier, Bock, Doppelbock, and Eisbock. These are generally low in alpha-acids, while being rich in maltiness. You’ll be surprised how much the hoppiness-maltiness balance shifts in favor of hoppiness during a reduction!

The first step for a beer reduction is to make a flavorful starter stock. Given the endless variations of ingredients from which one can make stock—beef, veal, poultry, lamb, game, fish, and just about any type of vegetable—the following is a simple, basic guideline that can be adapted in many different directions:

To obtain about 3 cups of starter liquid for a reduction, combine:

In a large saucepan, bring the mix to a rolling boil. Then reduce the heat, cover, cook for approximately 30 minutes, strain, and discard the solids. Add one or two cups of beer and reduce the stock further, down to the consistency of thick syrup. Turn off the heat. To smooth out the reduction, fold about 2 tablespoons of cold butter into it. Finally, for additional flavor, you can fold in an optional 1 fluid ounce of beer as well. 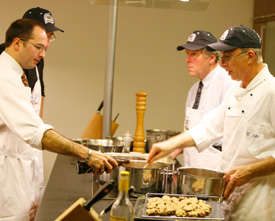 The following is a three-course menu with ingredients measured for four persons. The appetizer is an eggplant and chèvre terrine. There is a choice of monkfish or veal roast as the main course. An ice parfait with apricots is the dessert. Each dish features a different version of a beer reduction. These recipes were developed at Haralds Kochschule, a Munich cooking school owned by Chef Harald Schultes, where I have attended two one-day beer cooking courses organized by the Bavarian Brewers Federation. The courses were taught by the federation’s general manager Walter König and Chef Licht. The recipes presented here formed the menu in one of these courses. I adapted them slightly for North American kitchens; and they are used by permission of Haralds Kochschule.

The Munich beer cooking courses are eight-hour kitchen marathons. Each course is limited to 16 culinary professionals, split into groups of four. Each group is responsible for cooking one menu item for the entire class. König and Licht give short presentations about the flavor highlights to be achieved in the different dishes; the way the beer and the food are to complement each other; and the cooking techniques to be employed. The prep work and the actual cooking are scheduled throughout the day so that the entire class has enough time to sit down to eat each dish as soon as it is cooked and to critique the result.

In this appetizer, the beer partners with diced tomatoes in a reduction that serves as the base for a cold, gelatinous terrine, as well as an ingredient in the terrine dressing. Because of the creaminess of the goat cheese, you can accompany this appetizer with a hop-accented, palate-cleansing beer such as a hoppy Pilsner, a pale ale, or an IPA.  Ingredients 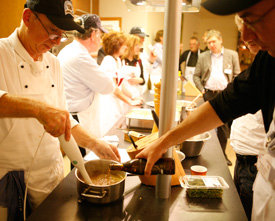 The centerpiece of this dish are two medallions of monkfish per person served on a bed of wilted spinach, surrounded by chanterelles (or other delicate, diced mushrooms) smothered in a white reduction made from beer-and-fish stock and laced with a second, dark, velvety reduction of balsamic vinegar and beer. If monkfish is difficult to come by, filets of cod, haddock, or other non-oily ocean fish are suitable substitutes. To plate the dish, place a handful of spinach in the center and douse it with spoonfuls of the dark sauce. Then place two pieces of fish on top of the spinach and cover these with the white sauce. Finally, sprinkle the chanterelles over the entire dish. A chewy Hefeweizen supports, rather than interferes with, the food flavors and thus provides a relatively neutral background for the mild fish and its heftier accompaniments.

This course is both the menu’s tour de force and its pièce de résistance. Depending on the diners’ appetites, it can be served after or instead of the monkfish. To plate it, place the beans and the potatoes au gratin next to each other and a slice of veal roast on top of the beans. Cover the meat with the sauce. Serve this hearty dish with a malt-accented brew that brings out the dominant meat flavors. Ideal is a Bavarian Dunkel or similar dark lager. Possible ale alternatives are an English-style dark ale, an Irish red ale, or a Düsseldorf-style, copper-colored Alt.Ingredients (Roast) 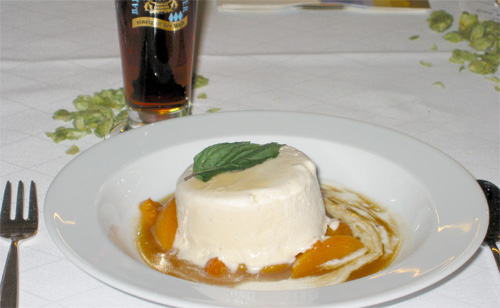 Logistically, the ice parfait needs to be made several hours ahead of time and kept in the freezer to set. For plating, the parfait is unmolded and served on top of a mound of apricots in the center of the plate, with a dribbling of sour cream sauce and a mint leaf as garnish. This dessert is best washed down with a strong and very malty brew, such as a Maibock, a Doppelbock, or an Abbey Ale.

Horst Dornbusch is a Massachusetts-based consultant in the international brew industry, the author of several books on beer, the associate editor of the upcoming Oxford Companion to Beer, and a frequent contributor to Zymurgy.