Some people seem to take pride in the fact their homebrew is hazy, usually alluding to the idea that the haze contributes greatly to the overall character of the beer, that it’s something all homebrewers should be proud of, as it symbolizes it was made by hand.

I’m not one of these people. At all.

One reason I don’t prefer hazy beer is that I enjoy sleeping next to my wife, though only slightly less important is the fact bright beer always tastes better to me. Even styles that allow for some cloudiness, like Saison, I still tend to prefer once they’ve dropped clear. I accept that my eyes may be biasing my taste buds. I have a feeling the sentiment that hazy beer is good comes solely from the reality that producing crystal clear beer can be a pain in the ass requiring either a filtering contraption or more time than most of us are interested in giving.

Brewers have developed numerous strategies for battling this annoying issue such as protein rests and using kettle finings like Irish Moss/Whirlfloc. My typical process includes the latter as a matter of course, even so, I still occasionally produce annoyingly hazy beer. I often use highly flocculant yeasts, cold crash, leave about an inch of beer in the carboy post racking, and wait a few days before tapping carbonated kegs in an attempt to pull clear beer from my taps. This usually does the trick, though as I’m sure many can relate, there are instances where a beer simply refuses to drop clear even after weeks in a cool environment. The culprit here is often chill haze, which very simply put, occurs when proteins in the beer come together as the temperature decreases, thereby increasing the opacity of the liquid; if you’ve ever let a hazy beer warm up and noticed it became very clear, you’ve experienced chill haze.

A couple years ago, I started hearing about brewers who routinely used gelatin to fine their beer, many swore it worked like magic, while others noticed little impact at all. I was intrigued, but too lazy to try it out for myself, as the large majority of my beers would clear up within 1-2 weeks of being kegged. It wasn’t until a few buddies and I brewed the same beer using the same exact recipe using our usual methods that I was inspired to try gelatin for myself. Brad, one of the five participants in the Brewer’s Thumbprint xBmt, was the only brewer to use gelatin to fine and his beer came out with commercial clarity, all the others were hazy as hell. I hit the web and discovered that while gelatin did seem to help with beer clarity, some folks complained it also reduced hop character in their beers, arguing that the aromatic oils were pulled out of suspension along with the haze producing compounds. It was time for me to put it to the test!

To investigate the qualitative differences between a beer fined with gelatin and one receiving no post-boil fining.

I’d been wanting to make a hoppy Pale Ale mashed low and fermented with WLP002 for awhile, I figured this was as good a time as ever. 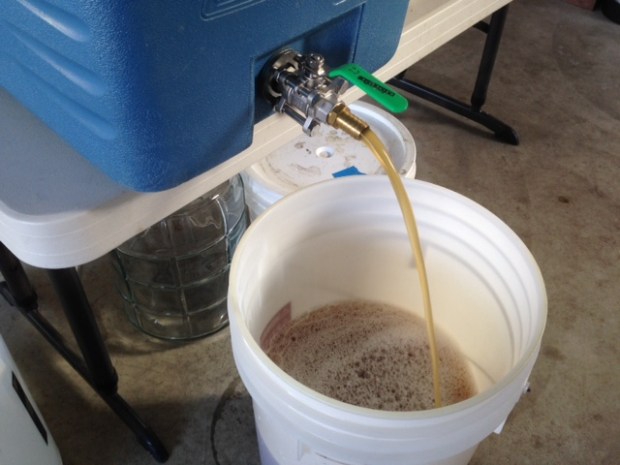 The boil happened, hops were added, the wort was chilled quickly with my JaDeD Hydra IC, carboys were filled and placed in my fermentation chamber, the yeast was pitched, and The Black Box was set to control the temperature to 65°F in order to suppress ester formation. After about 5 days, the krausen began to fall, fermentation activity was slowing, and I was nearing my target FG- it was time to dry hop.

A couple days later, I pulled hydrometer samples from both beers and confirmed they had reached FG. 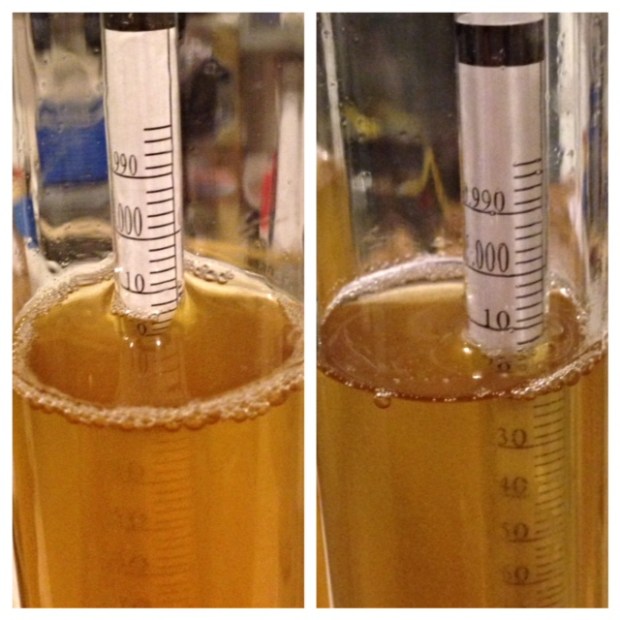 Up until this point, both beers had been treated exactly the same, it wouldn’t be like this for long. Prior to starting this xBmt, I’d read a few different ways people fine with gelatin, many seemed to prefer using it in the keg while others advocated for racking the beer to a secondary carboy and adding the gelatin to that. I chose a slightly different method, one that required very little in the way of changing my normal routine.

Step 1: Cold crash beer until it is below 50°F. I turned my regulator down one night and it was at 45°F the next morning.

Step 2: Make gelatin solution. I followed my friend Brad’s method of combining 1/2 tsp Knox Unflavored Gelatin with 1/4 cup cool water then microwaving it in short (7 second) bursts until it reached 145-150°F, stirring with the end of a thermometer between each burst. 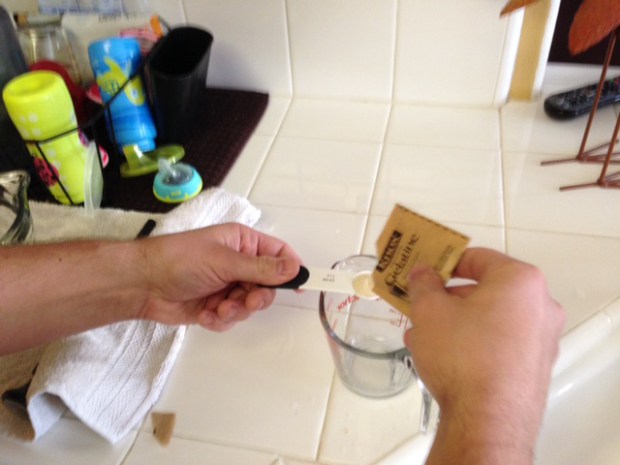 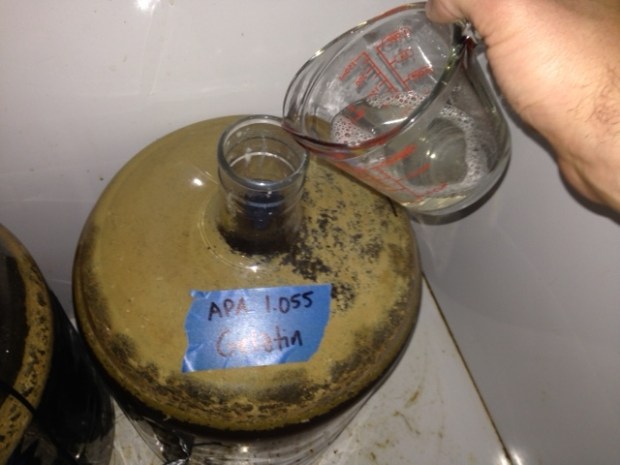 That’s all I did. I let the beers continue crashing to 32°F, which they were at by that evening, then let them sit an additional 32 hours or so. Packaging time came and both carboys were moved to a table, this is when I noticed an interesting difference in the appearance of the trub layer. 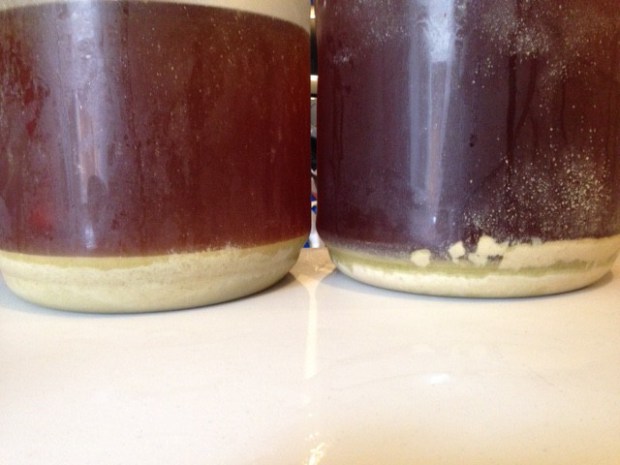 I’m not sure if it was caused by the gelatin or not, but I’ve never seen such a chunky layer of trub. I wondered if this might have been caused by the coagulating effect of the gelatin. Each beer was kegged using my standard procedure, at this point they both looked very similar.

The full kegs were placed in my keezer and left alone to carbonate for… errr… I was too excited to see if the gelatin worked and pulled some samples after only a day in the keg.

Okay, I’ve been thinking about how to approach writing about this next part. I usually try to save any discussion of differences for the results section, but since the primary reason people use gelatin is for clarity, any pics would reveal that difference before the results are presented, assuming it worked. Well… 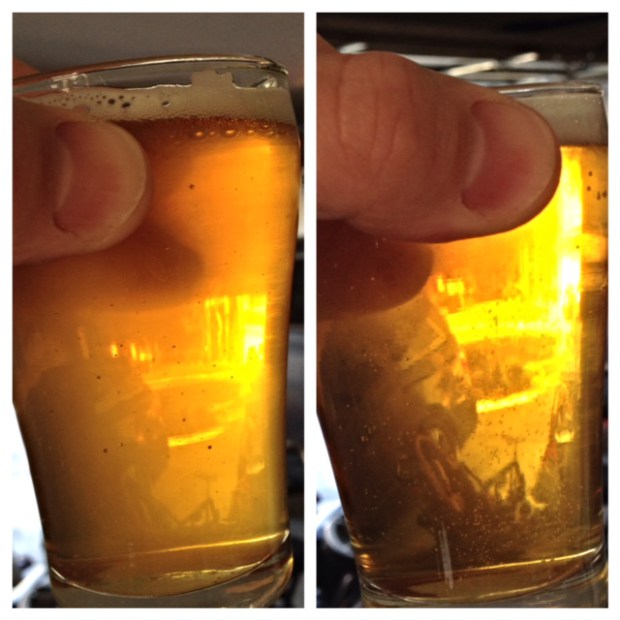 Both beers after a day in the keg, guess which was fined with gelatin 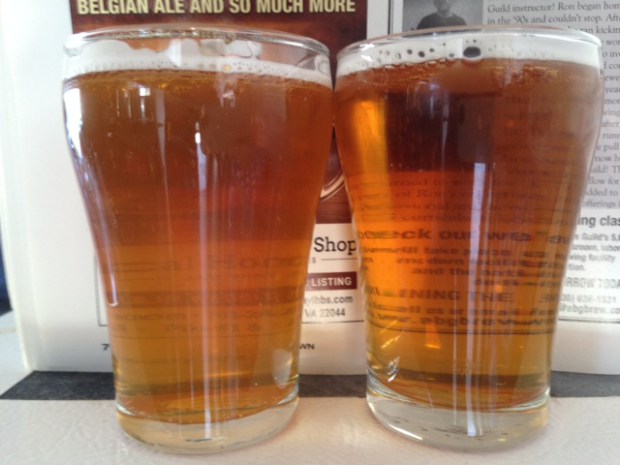 Another shot after a single day in the keg

I let the beers sit in the keezer for another 5 days before sharing them with tasting panel participants, mainly to allow them to finish carbonating, but I also wanted to give the batch that wasn’t fined with gelatin a fighting chance. The time definitely helped one of the beers… 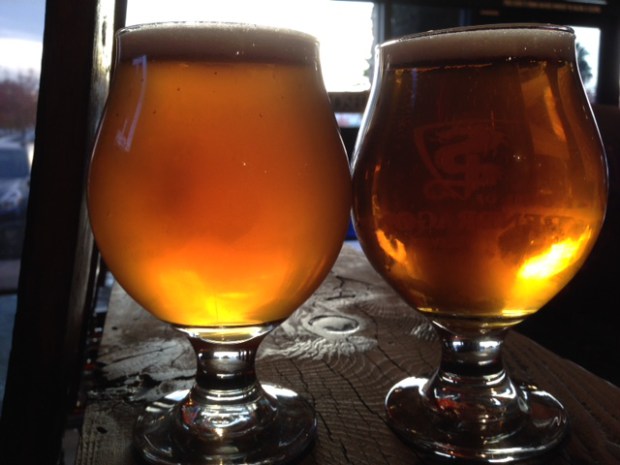 The difference in appearance only became more stark, with the gelatin fined beer dropping as bright as any commercially filtered beer I’ve seen, while the non-gelatin beer was super hazy, hazier than most beers I make, something I attribute to the 2 oz dry hop charge. They didn’t even look like the same beer, how would they compare in terms of aroma, flavor, and mouthfeel?

In total, twelve people participated in the tasting panel, all were blind to the nature of the xBmt. To reduce the chances of bias due to the obvious differences in appearance, I opted to provide samples in scientifically engineered opaque polystyrene vessels. Each taster was presented with 3 samples, 2 non-gelatin and 1 fined with gelatin, then asked to identify which one was different than the others. The participants who accurately selected the different beer were asked to complete another more detailed survey comparing only the 2 different beers, still unaware of the difference between them.

Given the number of participants in this xBmt, 8 (p<0.05) would have had to accurately select the different beer in order to conclude that gelatin had a significant effect on the overall character of the beer. Of the 12 people on the tasting panel, only 5 accurately selected the gelatin-fined beer as being different than the others. While slightly more than chance (4 or 33%), not even half of the experienced panel of tasters were capable of distinguishing differences in aroma, flavor, or mouthfeel between the beers.

Despite insignificant results from the triangle test, I thought some readers may find the information from the second survey, taken by the 5 participants who were accurate on the first survey, at least somewhat interesting. 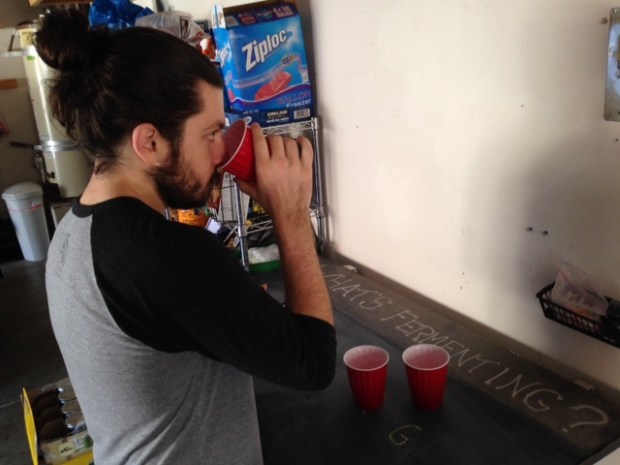 Four tasters preferred the flavor of the no gelatin beer while the other taster perceived no detectable differences; in terms of similarity, 2 reported the beers were not at all similar, 2 thought they were somewhat similar, and 1 felt they were exactly the same.

Three tasters chose the no gelatin beer as having better mouthfeel white the others preferred the gelatin-fined beer; 3 tasters believed there to be some similarity between the beers, while the other 2 experienced them as being exactly the same.

My Impressions: First off, I really enjoyed this beer, the 002 imparted great malt character but not enough to drown out all the hops. I absolutely will be fermenting more American styles with this strain! As far as comparing the beers, I do believe I noticed some very slight differences between them. My experience, which was absolutely biased, matches that of the folks who claim fining with gelatin slightly reduces hop character, as the no-gelatin batch did seem to have the subtlest bit more hop aroma and perhaps a touch more body. But here’s the kicker:

I totally preferred the beer that was fined with gelatin!

Not only did I perceive the hop character as being mostly intact, but I experienced the beer as more crisp and refined, like a great commercial quality beer. Plus, it looked gorgeous!

I’ve used gelatin in all of the beers I’ve made since analyzing this data, it has worked amazingly well, clearing beers up within a day or so of being packaged. While anecdotal experience may differ, the results of this particular xBmt seem to indicate that fining with gelatin does not significantly impact the aroma, flavor, or mouthfeel of beer. And it’s f**king cheap! I paid $10 for enough gelatin to fine over 100 batches of homebrew, as each packet is good for about 3.5 carboys worth of beer. If you’re looking to end your haze problems, this may be just the solution!

Something some of you may find important: gelatin is non-vegetarian, so if you are or you brew for someone who is, consider using another fining product such as Biofine Clear or Polyclar.

Have you had a similar or perhaps totally different experience fining with gelatin? Are you a gelatin scientist who can shed some light on this interesting subject? Care to share your opinions as to how this exBEERiment could have been better by using techniques most of us don’t understand? That’s what the comments sections is for! I appreciate any and all feedback, so please do not hesitate to leave your honest thoughts. Cheers!